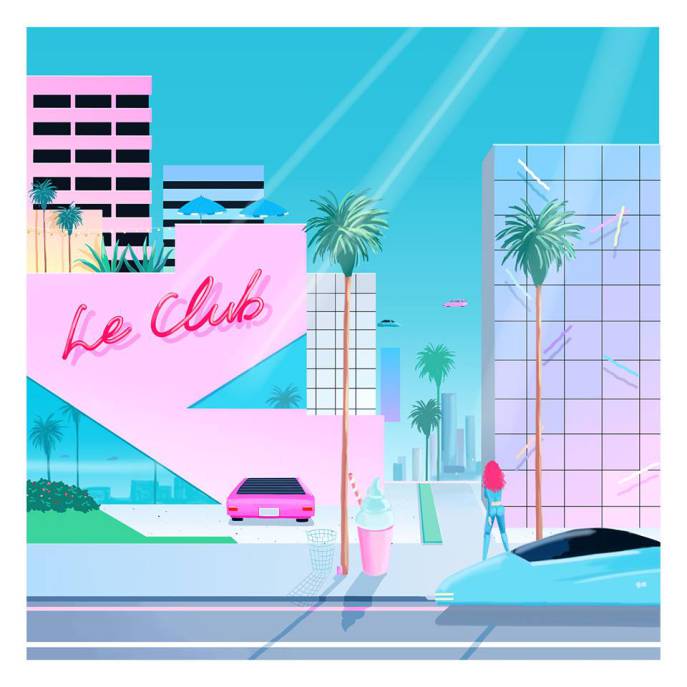 Le Galaxie’s music is a brash all out attack on the senses. Their live shows are events in and of themselves. Mini-festivals and all-consuming celebrations of dance, oneness and sound. It seems fitting therefore that the group’s new album Le Club speaks to the joyous abandon that has become entwined with the four-piece themselves.

Le Club is an album about excess. The length, the production, the sound, the stylization, the atmosphere of the record is extravagantly bold. Beats, synth lines and vocals are thrust into a dominating foreground that insists itself upon the listener from beginning to end. The entire record buzzes with excitement, rarely pausing for breath.

On tracks such as ‘Humanize’ and ‘Lucy Is Here’ heavy beats slam and pound the low-end of the album with intent. Indeed with the full-on sound of the tracks it’s incredibly impressive to see how Le Galaxie still find that extra jump in sound that defines chorus from verse.

The entire record feels like one big celebration of indulgent excess. Songs such as ‘Le Club’ play with hypnotic repetition while Le Galaxie throw the kitchen sink at the album’s production with every corner of the record’s sound being filled by some ear-catching elements.

Strangely, the pinnacle of Le Club as an album does not come from one of the more all-encompassing tracks but rather the relatively more reflective, serene sound of ‘Love System’ (featuring Elaine Mai). Indeed, the song could very well be Le Galaxie best work to date.

However, there is one central flaw that seeks to hinder Le Club. That is its overt connection the album has to the current 80’s kitsch trend. The productions’ highly stylized sound leans too heavily on this fad and could end-up aging the record in the long-term.

This issue seems to fill every aspect of Le Club and ultimately weighs the record down. The 80’s aesthetic is beginning to feel played-out already and it would be unfortunate for this album to become a victim of time because it deserves to be seen as more than that.

Brilliantly bold and true to its convictions Le Club is an album of pure kinetic energy. The album conveys abandon, limitless creativity and invention all held together by Le Galaxie’s daring ambition. It’s not perfect, at times it is down right messy, but as with all excess that seems to be the point.

Le Club by Le Galaxie is out now.