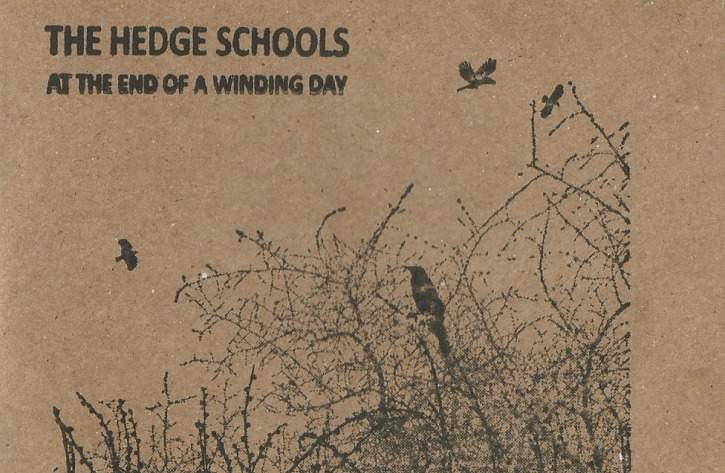 The Hedge Schools – At the End of a Winding Day

The Hedge Schools return with the release of their beautifully atmospheric sophomore album At The End Of A Winding Day.

Slowly fading into focus with rasping melody the fusion of styles and sounds that will come to occupy At The End Of A Winding Day are deftly alluded to in the instrumental opening title-track.

As the alternative-pop tinged production (comparable to recent releases from fellow Irish acts Slow Skies and I Have A Tribe) of the album creates a harmonically moving backdrop for the songs to sit upon, the sense of place that the L.P. seems to create is greatly realised. Tracks such as ‘Sleeping Song’ weave themselves musically around the vocals, becoming one intertwined sound.

Indeed, this shaping and tempered approach to the sound At The End Of A Winding Day works to keep the record feeling cohesive in its mood and tone throughout, although the album does move from moments of deep reflection to uplifting hope (‘Home’) this over-arching sound instills a common thread through out.

However, it is with the stunningly beautiful ‘Winter Coats’ that the real emotive and musical power of the Hedge Schools comes to the fore. Set to a heavy melodic background, the song glistens with texture and echoes with softly hissing reverb, all of which supports the longing that permeates throughout the captivating central vocal performance.

Steeped in a serene, gently set atmosphere At The End Of A Winding Day is an album that takes its time in building the world it inhabits. A work of crafted musicianship and songwriting, the record is a complete experience and needs to be listened to as such. And while the music is in no-way a drastic reinvention of its influences there’s no denying the care and artistry that the Hedge Schools put into its making.

At The End Of A Winding Day by the Hedge Schools is out now.