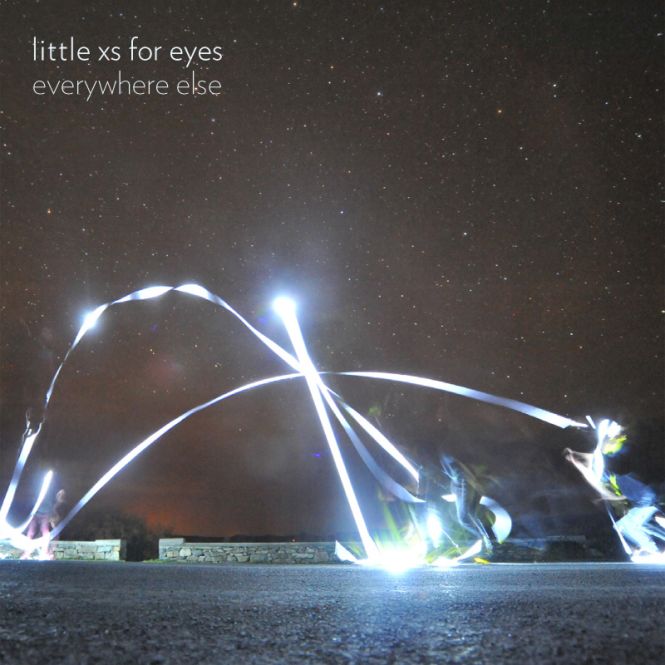 Beginning with the syncopated vocal rhythms and harmonies of ‘Phantom Wings’ that introduce Everywhere Else (quickly followed by the indie-pop gem that is ‘Love Gets Lost’), it becomes very obvious that the several years wait for Little Xs For Eyes second album has been worth every second.

With each track blending so gently into the next Little Xs For Eyes create a definite sense of place with Everywhere Else. Found in the rippling water sounds and arpeggiated synths that bridge ‘Seeping Heart’ and a beautifully reworked version of ‘Summer Stay’ this over-arching atmosphere shapes the album into a much bigger experience.

Indeed, the entirety of the album feels more expansive and in-depth than the group’s stand-out debut record S.A.D. With the years since it’s release resulting in Little Xs For Eyes’ music becoming more fully realized in terms of both songwriting and production.

This is nowhere better seen than the high-water mark of Everywhere Else, ‘Logical Love’. The zenith of all the comes before it and afterwards, the song perfectly merges everything that is so engrossing and cathartic about the album within a neon shimmering disco track that calls to mind the groundbreaking sound of Blondie circa ‘Heart of Glass’.

That’s not to say that Everywhere Else falters or falls beyond this point. The brilliance and structured harmonic excellence of ‘Funk Island’ captures the imagination in an unexpected but stand-out moment that on its own would be a high-point of any band’s career.

Encapsulated within the indie-pop verve and bright shining production found on Everywhere Else, Little Xs For Eyes traverse the emotive twists and turns that make music, and life itself, so gratifying. Heartbreaking one moment, hopeful the next, the album delivers what we expect, want and need from art. Giving a voice to relate our own feelings and thoughts in possibly the most effective medium at our disposal, pop music.

Everywhere Else by Little Xs For Eyes is out now.

4 comments on “Little Xs For Eyes – Everywhere Else”