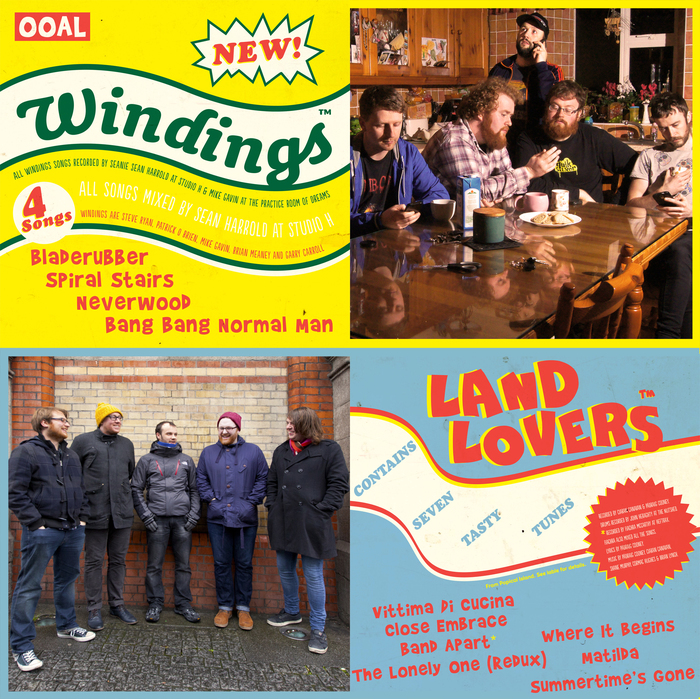 The sudden blast of scrabbled noise that opens Windings side of the L.P is followed briskly by the slow-burning atmosphere of ‘Bladerubber’. Populated with startling, fuzz-laden dynamic jumps that give way to a swirling cacophony of ambient noise, the song sets the scene perfectly and captures the alternative-rock outfits sense of scope.

Showcasing Windings’ ability to introduce a hook driven edge to their music, ‘Neverwood’ blends the band’s frantically paced aggressive tone with a more playful sense of melody. The swaggering aesthetic of ‘Bang Bang Normal’ also works to keep this sonic thread throughout Windings half of the record, keeping the group’s contribution sounding cohesive and well crafted.

However, it is with the track ‘Spiral Stairs’ that Windings truly capture the sheer spectrum of sound and depth that the band are capable of. Infused with a more subtle sense of performance and harmony, the buzzing backdrop and shimmering guitar create the palpable textural juxtaposition that forms the core of song, giving the band room to weave their unique musical approach.

The pulsating punk-influenced pounding of ‘Vittima di Cucina’ opens Land Lovers half of the record. Wasting little time in setting the vibrant thrashing indie-pop aesthetic of Land Lovers sound, the succinct introduction works to contrast the group’s style from Windings while still maintaining the L.P’s sense of cohesion.

The group’s stylised, harmony driven approach is simply infectious. With tracks such as ‘Where It Begins’ and ‘Summertime’s Gone’ highlighting Land Lover’s pin-point pop, brilliantly offset by the thrashing of noise influenced guitars and swaying soul inspired percussion.

Providing the high water mark of the record, ‘Matilda’ contains a staggering spectrum of hook-laden elements that work to construct the song’s joyously vibrant sound. The grounded lyrical content, 60’s beat styled approach and moving backing harmonies blend together to create a track that is simply sublime.

While a split L.P can run the risk of sounding disjointed and underdeveloped, Windings and Land Lovers avoid the possible pit falls of the format with an album that finds the duo’s music working together while still remaining individual and relevant.

Windings/Land Lovers is due out on February 28th via Popical Island and Out on a Limb records.