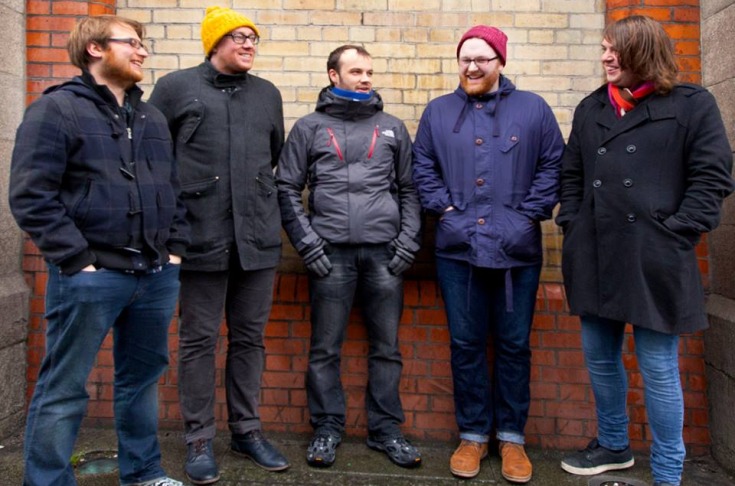 How did the decision to release a split L.P with Windings come about?

It was a gradual process really. We’ve always been fans of Winding’s music and we got to play a show supporting Windings for Out on a Limb records which was curated by Steve (Ryan). At the time we were working on new material for an E.P but we were a bit dubious about releasing it in that format. Then we found out that Windings were in a similar boat, that’s when the decision to release our work collectively came about.

Although both yourselves and Windings have very different sounds, do you think that their was enough of a thread stylistically to make the record cohesive?

Yeah, I think that both Popical Island and Out on a Limb are very different in terms of sound and band’s that their outputting at the moment. But we have the same a similar approach to the music we make. In relation to Land Lovers and Windings I think the similarities come from the fact that we are both bands based on songwriting.

Did you have a definite idea of the songs that you would include on the L.P or did you have to leave some out?

For us there was a feeling of clearing the decks with this record. Our drummer left before hand, so we wanted to draw a line under these songs and move on with the new line-up for the next album, that way the record won’t be as big an undertaking for us as a group.

You’ll also be releasing a double A-side single with Windings. What was it about ‘Vittima di Cucina’ that made you choose it as the single?

I think it popped out a everyone. Fiachra (who mixed our tracks) really liked it and suggested it as the single, although ‘Matilda’ was also considered to be a single as well. It’s also quite short and up-tempo which makes it one of our more radio-friendly songs. It’s under two minutes so it can be thrown in at the end of most DJ sets (laughs).

How do feel these tracks translate live?

Most of them were live band arrangements and had been performed live for a while now. They all kind of started out life that way, this record was a lot more live based than structured demo’s and layering. So when it comes to performing them live it’s like second nature, we know how they work.

Windings and Land Lovers will launch their split L.P in the Workman’s in Dublin on March 8th. The record is due out on February 28th via Popical Island and Out on a Limb records, read theLastMixedTape’s review of the album here.