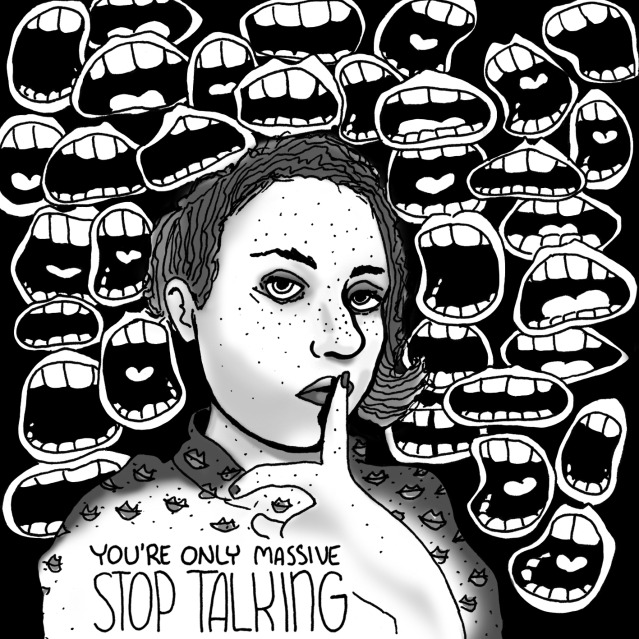 The fast paced start and pointed vocal performance of ‘High Speed’ sets the off-kilter, expect the unexpected, tone of Stop Talking perfectly. Sitting above a fuzzy, equally propellent, synth driven soundscape the album quickly moves from the grooving feel of ‘It Will Work’ to the harsh lo-fi rhythms of ‘Energy’.

Finding their home between the jolting synth sounds of group’s such as Nanu Nanu, I Heart the Monster Hero and Voids, You’re Only Massive centre their music around an ever-changing, hard-cutting sound that can switch its entire tone and mood in the blink of an eye.

Merging hip-hop and synth-pop into a large-scale Pop-art influenced aesthetic tracks such as ‘Breathe’ and ‘Grand Theft’ screech, shout with a frantically intertwined vocal lines that cross and collide into one another with sheer abandon. Resulting in the grimy, collage-esque overall sound to Stop Talking.

There is a fine line between madness and invention, one in which You’re Only Massive violently and impressively swerve around with such abandon that it’s hard not to be captivated by it. Stop Talking is a frantic, uncompromising exercise in individuality and risk that the duo somehow pull-off. Compelling.

Stop Talking by You’re Only Massive is out now.