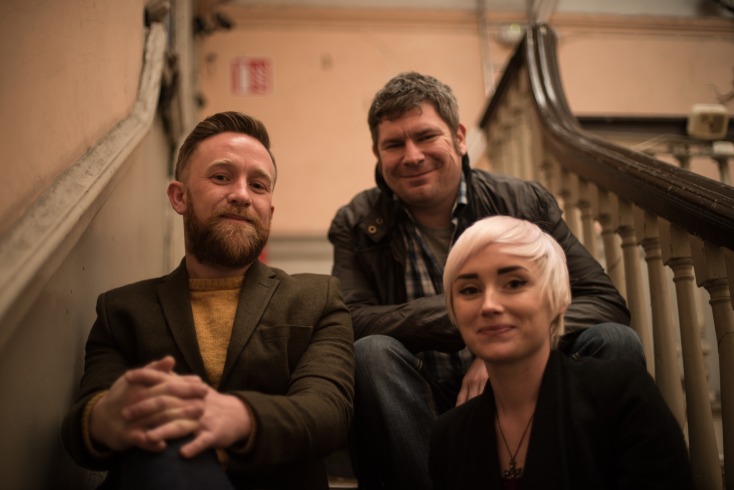 Weekly Irish-indie radio show the Co-Present is set to celebrate its first birthday broadcasting on Radiomade.ie this month (November 21st at 1pm). Hosted by Dwayne Woods and co-presenter Niamh Farrell the show has featured a plethora of live performances and interviews with some of the countries most exciting artists.

Dwayne, Niamh and sound engineer Gav Hennessy recently spoke to T.L.M.T about the Co-Present’s first year and plans for the future.

“I always wanted to do radio, and a girl I worked with put me in touch with the guys at Radiomade” Woods recalls about how the Co-Present first began. “I went in to Jack and the guys with absolutely no idea what I wanted to do really, I think I threw together the Co-Present idea about 20 minutes before I met them (laughs) and they said “sure, go for it”.

“After that I put up a blurb on Facebook about the show and Gav got in touch asking how I planned on doing the recordings.” the host continues. “And after that Princess Siwela (the Notas) joined, and we had our first show with Nanu Nanu. I think we started to find our style after a while, and I think it’s important that we can give a platform for Irish acts to be heard from, plus Gav’s live recordings are fantastic as well”.

Following Siwela’s departure from the Co-Present Dwayne put out the call to Ham Sandwich vocalist Niamh Farrell who had worked in radio before, featuring on Michelle Doherty’s Phantom FM show in the past.

“I’ve always really enjoyed doing those radio shows in the past” Farrell comments. “And once I saw Dwayne’s message on Facebook I was said “count me in”. I’ve always said I wanted to go away and do a course in radio but people have said “just do it, get the experience”. And the past year has been a bug learning curve for me and the guys as well”.

With the Irish music scene currently brimming over with talent and creativity the Co-Present team realize the importance of helping to promote new up and coming artists.

“We wanted to give Irish acts a platform really. I just thought there needed to be a specific show with live music and an Irish artist playing songs from their favorite Irish artists, to help promote it all” insists Woods. “There were moments when I though we might run out of acts or ideas. But there’s so much going on that we never have. There’s just so much scope as well.”

“And we’ve had everything from dance to trad music come into the studio” says engineer Gav Hennessy, who handles the live Co-Present sessions. Over the show’s first year the show has featured live performances from Liza Flume, Carriages, Spies, David Turpin, Swords, Elaine Mai and many more.

“We’ve actually ended up going and recording in band’s rehearsal spaces and that’s seen us in some very strange places” explains Hennessy. “When we recorded Carriages’ session, we ended up doing it in a morgue (laughs).”

With the show constantly introducing new emerging talent, the host’s commitment to the Irish music scene is clear. “Even when I’m with the band gigging I always love to just hang out and talk with other musicians about what everyone is doing and meet new people’ Farrell says. “I really like when we bring in someone I’ve never met before. Like when Hilary Woods came in it was amazing, she was just so lovely and her music was fantastic as well. Getting to meet someone like that and being able to chat to them every week is a great experience.”

“And having these bands come in and play live is so important.” Woods comments. “Having four or five people come in and play in such a small room is so intimate and it’s hard to recreate that feeling. I think it’s nice as well that the recordings are so good too. Band’s can use the Soundcloud page to share their live performances. It’s just so great to have that, I can’t believe it’s been a year already.”

With their first year now behind them the Co-Present crew are now looking to expand in the coming months. “The next step is to build-up our live audience, most of our listeners download the podcast and it would be great to have that live interaction with listeners.”says Woods.

‘I can’t wait to start doing live events with the Co-Present as well” Dwayne continues. “We had our launch party in the Workman’s and it was so much fun. I got to MC the show and the sound quality of the performances were great too. I definitely want us to do more of that.”

“Also I think having a show like that works out as something special for people who can’t come to live shows” explains Niamh. “Having a gig like that broadcast live means you get to listen to it at home with your friends, having a few drinks and having fun.”

“And it would be great to take it out on the road as well” explains Woods. “Bringing the show to other cities or venues and giving local bands the opportunity to play and appear on the Co-Present as well. That will also take it away from just the radio side of things and into more all-encompassing event management and promotion. The most important aspect is to get other people’s music heard”.

Listen to the Co-Present every Friday from 1pm – 3pm on radiomade.ie.