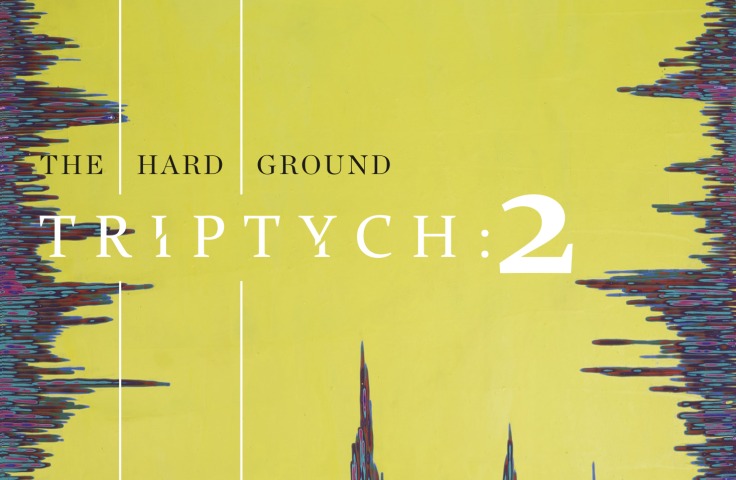 The second instalment in the Hard Ground’s Triptych series is a harmonious progression from the previous release that defines itself with abrupt flourishes of musicianship while also remaining cohesive.

From the first persistent pounding of piano on ‘Capon’ it becomes clear that the Hard Ground have lost none of their mood or grandeur. Then, with the sudden introduction of interchanging dueling vocals the dominant motif of the record becomes clear. Triptych: 2 is an E.P of sharply defined twists and turns both vocally and stylistically.

This feeling of interlocking interplay is carried even more purposefully on ‘Coin Toss’ (even the name itself evokes duplicity). Trading melodies step forward and back into the song’s characteristically full-bodied backdrop to create effective and unexpected moments that quickly recede into memory as the track moves briskly to the next section.

What is most impressive about this approach (keeping in mind that the Triptych series will eventually culminate in a full album) is how perfectly the feel of it blends with the previous instalment. This is in no small part due to several unique characteristics indigenous to the Hard Ground’s sound.

The group’s ability to naturally create dynamics and tonal shifts within their music is stunningly realised, while both Pat Carey’s and Marlene Enright’s voices convey an essential closeness amid the sheer force of the band’s turbulent interplay.

‘Deep In Green’ is crucial to Triptych: 2 being successful in this context. Delivered with a gradually building atmosphere that propels the music forward and centred around a hushed vocal that eventually opens to a larger array of harmonies, the song encapsulates everything that is so engrossing about the Hard Ground’s songwriting and production aesthetic.

In a much broader context, an interesting aspect to Triptych: 2 is how it stands by itself while also thematically following on from Triptych: 1 (an E.P that it will eventually become intertwined with).

Feeling like the darker side-A to Triptych: 1’s slightly more vibrant side-B, there’s almost a “flipping the vinyl” effect that connects the pair but also separates them. Although the Hard Ground do remind us sonically that there is still one more instalment to come in the reflective but hopeful finale ‘All In Time’.

Triptych: 2 is the suitably moodier and tonally sharper departure from its predecessor. Containing more defined edges and interwoven bursts of musicianship the E.P is able to exist in isolation as a stellar release in and of itself, while also as an integral part of a much bigger picture. The Hard Ground’s ability to pull off this difficult task without faltering under the weight of the ambitious “three E.P’s into one album concept” is impressive on every level.

Triptych: 2 by the Hard Ground is due for release on Friday, September 12th.