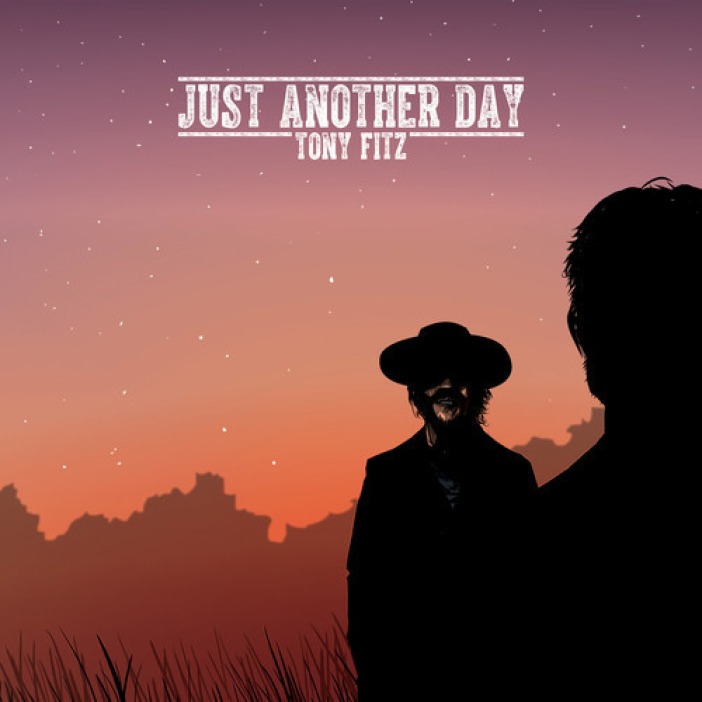 Just Another Day by Tony Fitz is a deeply creative take on the E.P. format that melds atmospheric alternative-folk with an accompanying comic book that gives an evocative visual aspect to the record’s narrative.

As the opening sliding notes slither from the speakers to the gritty alternative-country sound of ‘The Murder’, the cinematic scope of Just Another Day snaps into focus as the large-scale chorus alludes to the record’s greater sense of place. Coinciding with the comic book artwork the song feels like the beginning of an engaging story-arc.

Resonating with a deep harmonic undercurrent, ominous string melodies (seen on ‘The Shootout’) weave themselves around direct vocal passages to give Just Another Day a stark mood supported by a vivid soundscape. While ’19 Year Ago’ pounds with a percussive weight that gives the E.P. a more full-bodied sound.

In context the way in which Tony Fitz scores the comic book and how Tommie Kelly’s artwork convey’s the dark tone of the music in turn, is a compelling merging of these separate mediums with each artist’s approach finding a symbiotic central mood.

Furthermore, with many musicians looking to expand their art through unique creative practices (such as Laura Sheeran’s upcoming album Spellbook taking influence from bespoke visuals filmed by the artist) Fitz and Kelly’s collaboration feels relevant and refreshingly new. While also playing a part in the continued blurring of the lines between two once disparate processes.

On Just Another Day Tony Fitz creates a unique soundscape with strong flourishes of folk, country and blues. With each track having a characteristic of its own, the record feels cohesive with several musical motifs recurring throughout that anchor the narrative concept of the piece. A bold work of visual and musical brilliance Just Another Day is a undeniably singular experience.

Just Another Day by Tony Fitz is due for release on September 12th and is available to pre-order now.