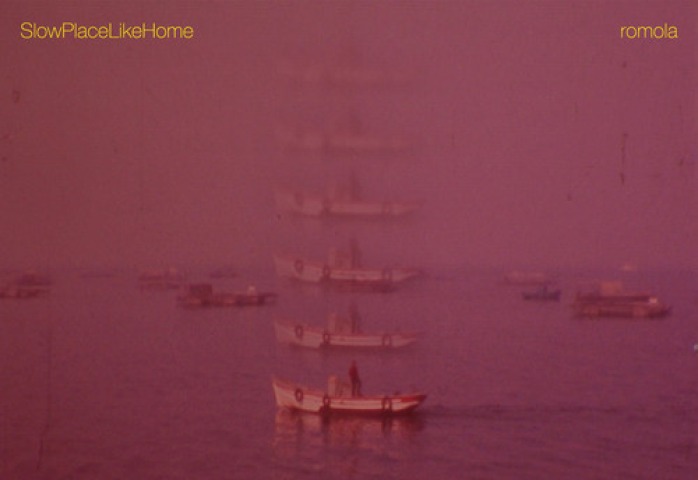 Romola, the début album from indietronica artist SlowPlaceLikeHome, is an ambitious effort that delivers a record of immense atmosphere.

Opening with the breathless sibilant hiss of reverberated vocal on ‘Our Rules’, the serene harmonic slow-burn of the track is suddenly given weight by a strong percussive backbone. This merging of gentle texture, harsh sonic edges and propelling pace sets the tone for Romola as a whole.

Throughout the album a definite sense of place and time is given to the music. Synth elements are allowed to breathe within the record’s vast soundscapes. While various melodic parts emerge from this backdrop to briefly steal focus, before blending with the perfectly placed vocal which becomes engulfed within this palpable ebb and flow.

At it’s centre is ‘Romola (part 3)’. Capturing the great washing tone of the album, the song embodies the scope of the record both sonically and stylistically. While also working to further develop the ever-evolving landscape of the music.

Romola is an album of texture and atmosphere. With the interlocking nature of the piece SlowPlaceLikeHome creates a record that is a complete experience. Wherein every song leads to the next with a feeling of deep cohesion.

In context, this is a bold move for the artist to take on his début. While songs such as ‘Luna’ and ‘She Comes In Stereo’ can be taken in isolation, the impact of the L.P. is only truly felt while listening to the piece as a whole. Making Romola an interesting, ambitious first release. And for that SlowPlaceLikeHome must be respected.

SlowPlaceLikeHome has established a definite sense of identity and character in his music with Romola. Foregoing aggressive attention grabbing sounds for more atmospheric subtlety, the artist has chosen to produce something more substantial. Indeed Romola feels and sounds like the first addition to what could be an immense body of future work.

Romola by SlowPlaceLikeHome is due for release on August 11th via Bluestack Records.