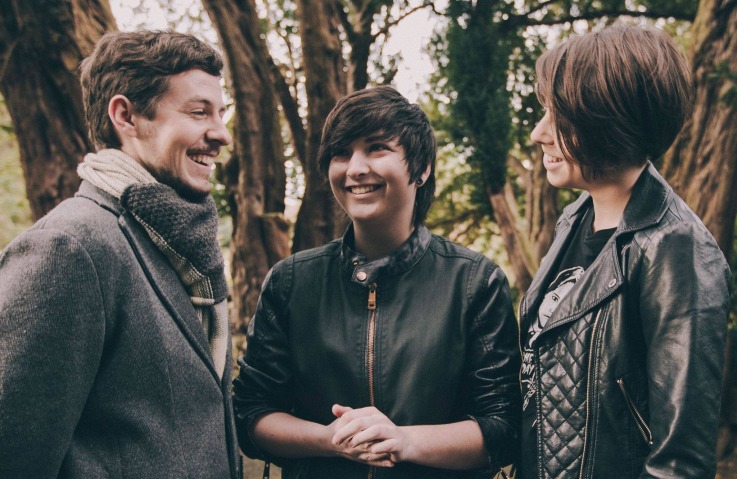 With the release of their début album Hollow alternative-rock act Kate’s Party identified themselves as one of the countries most promising emerging bands. Sarah Corcoran & Niamh Hanley met with the Last Mixed Tape recently ahead of their upcoming Whelan’s (August 2nd) show to talk about the group’s beginnings, evolving sound and future.

“It started with me and Niamh playing covers on acoustic just for fun” recalls Corcoran about how Kate’s Party first began. “Then we started to share song ideas and it became obvious that it should be something more than that”.

Indeed this stripped down early version of the band’s sound would influence Kate’s Party’s first E.P as they moved from an acoustic to a full-band alternative-rock sound. “At the time we had to speed the songs up. And let the drums and bass just drive everything forward.” says Hanley.”But because they were written on acoustic, it meant they weren’t as dynamic as what have on the album now”.

Hollow would herald in a new sound and style while working as more instant picture of who Kate’s Party are as a band. “‘Cougar’ was the song that changed it for me” Niamh insists. “There’s a few songs we wrote in the last three months before recording that sound a lot more like what we’re doing now. I think it was important for us to separate our past sound and songs from what we’re doing now. We didn’t want to give the same impression that E.P. did because we’re older now. Plus Sarah is always writing new songs too.”

“Welcome to Seahaven’ was kind of both.” Corcoran continues. “Seahaven was the name of the town in The Truman Show. And the sign that welcomes people in seemed to be letting you know that you’re being watched from now on. That idea of constantly being watched or filmed was something that interested me. When I was growing up in Finglas me and my friends used to pretend that we were being filmed for an audience, just like the movie (laughs). We would talk about how there has to be something more going on then what us just hanging out. While pretending there were cameras hidden in the leaves of trees (laughs). But that’s were the lyric “the leaves are watching us” comes from. It’s a kind of reference to my friend and to that idea”.

Looking to the future, Kate’s Party are about to embark on a tour of the UK following their headline show in Whelan’s on August 2nd. The band have been well-received there in the past and are keen to play there once again. “It was so strange the first time we got to play a large venue over there as support to an American band. There were people who had old band T-Shirts of ours that I must have mailed to them years ago, and were nearly crying with excitement when they met Niamh (laughs).” says Sarah.

And with their first album behind them the band are already starting to think about new material. “We’d like to do another E.P.” says Corcoran. “So we can show where we are going between now and the next album. Also, I think working with a producer who understands our sound and will work with us is something we’d definitely be interested in doing.”