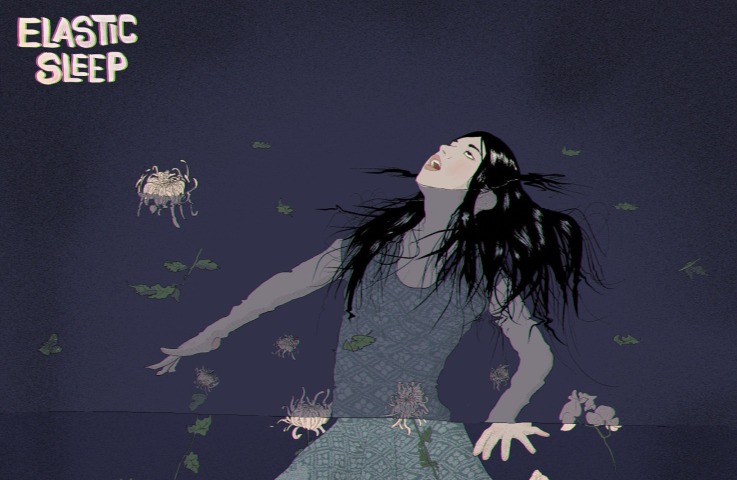 Elastic Sleep deliver on all of the group’s early promise with a début E.P that works as an expansive affirmation of their deeply individualistic sound.

With a sudden pulse of guitar followed quickly by a glistening texture that captures focus and alludes to the vast sonic landscape of Elastic Sleep’s début E.P, the sheer beauty in sound and immense spectrum that populates the record is established almost immediately. Within the opening title track ‘Leave You’ every prior expectation of Elastic Sleep’s first extended play is both exceeded and augmented.

Maintaining the visceral momentum found in the crescendo of ‘Leave You’ tracks such as ‘I Found Love’ give a more intense, aggressive tone to the E.P. While the enchanting, hypnotic atmosphere of ‘Deep and Blue’ opens the textural and dynamic scope of Leave You with sudden flourishes of harmonic weight that echo and recede into a turbulent backdrop of percussion, noise and melody capturing the broad feel of Elastic Sleep’s distinctive musical approach.

The stunning overall force of Leave You seems to permeate from each track. Never seeming to be held down by specific genres or stylistic aesthetics Elastic Sleep simply create a sound that is entirely their own. The engrossing meld of dark tonal textures offset by uplifting whistling melodies found in the E.P’s finale ‘Stay’ highlights the group’s ability to meld and form influences into a sound that individualistic and engrossing.

Leave You is breathtaking. A début record that is mature, uncompromising and exciting the E.P constantly flickers with moments of sheer brilliance. In context, the fact that this is the Cork band’s first extended play only shows the depth of talent the group exudes. The perfect introduction to one of Ireland’s most promising acts.

Leave You by Elastic Sleep is out on April 28th via Big Tea Records and Fifa Records.

7 comments on “Elastic Sleep – Leave You”