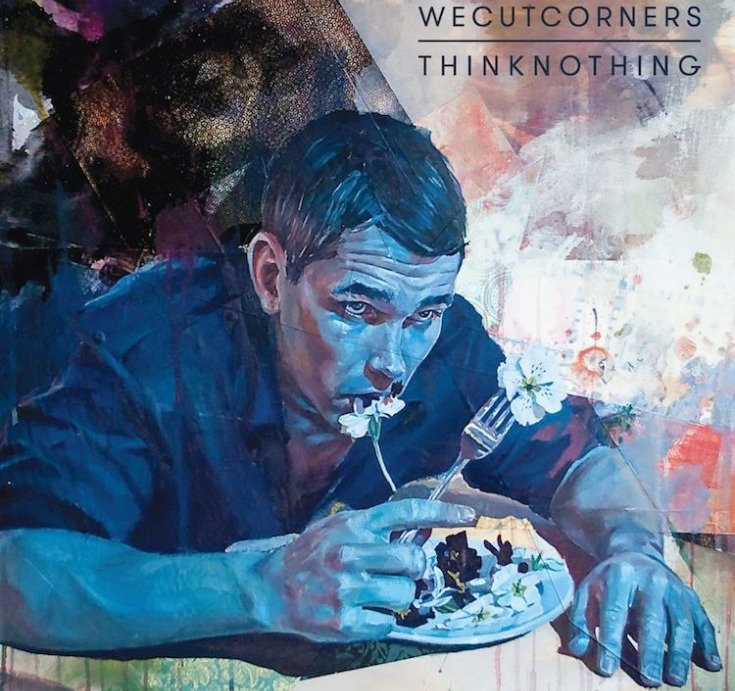 We Cut Corners return with their dynamically and sonically stunning sophomore studio album, Think Nothing.

Subtly opening with a solitary vocal that softly reverberates within the album’s engrossing introduction ‘Wallflowers’ and working as an encapsulation of Think Nothing’s brilliant use of building dynamics and sudden drops, the songs sense of aspect is given from the beautifully delivered vocal’s contrast to the large-scale orchestration that engulfs the track, resulting in an attention grabbing start to the record.

To further develop the over-arching sonic aesthetic that forms Think Nothing’s sound, the sudden blast and visceral relentless pounding of ‘Blue’ ensures that We Cut Corners’ raw energy (seen in the duo’s début L.P Today I Realised I Could Go Home Backwards) remains while expanded upon through the sheer force of the group’s powerful performance. With this track we see that nothing has been lost in translation between the band’s studio and live work.

The sweeping sonic nature of Think Nothing demands that the record be experienced as a whole piece from beginning to end. The eclectic blend of instrumentation and textures shown throughout makes the transition between softer, more brooding songs like ‘Maybe In The Future’ and the harder-edged distorted tone of ‘This Is Then’ feel natural and considered.

Think Nothing showcases a more focused approach to We Cut Corners aggressively shuddering sound. Found most succinctly in ‘Best Friend’ with the snarling rhythmical vocal mirroring the fuzz-laden relentlessness of the recording’s sonic backdrop, all the elements of the duo’s music collide into focus with the scope of the album itself being opened to great effect.

With an album populated by large-scale dynamic peaks and valleys melded with a definite tonal centre, We Cut Corners have delivered a sophomore album that not only expands on its brilliant predecessor but also out shines it. Contextually the group have honed their sound more clearly in a record that flashes and flickers with moments of real beauty and visceral, growling aggression.

Think Nothing by We Cut Corners is out on 25th April (Ireland) 12th May (UK) on Delphi.

3 comments on “We Cut Corners – Think Nothing”