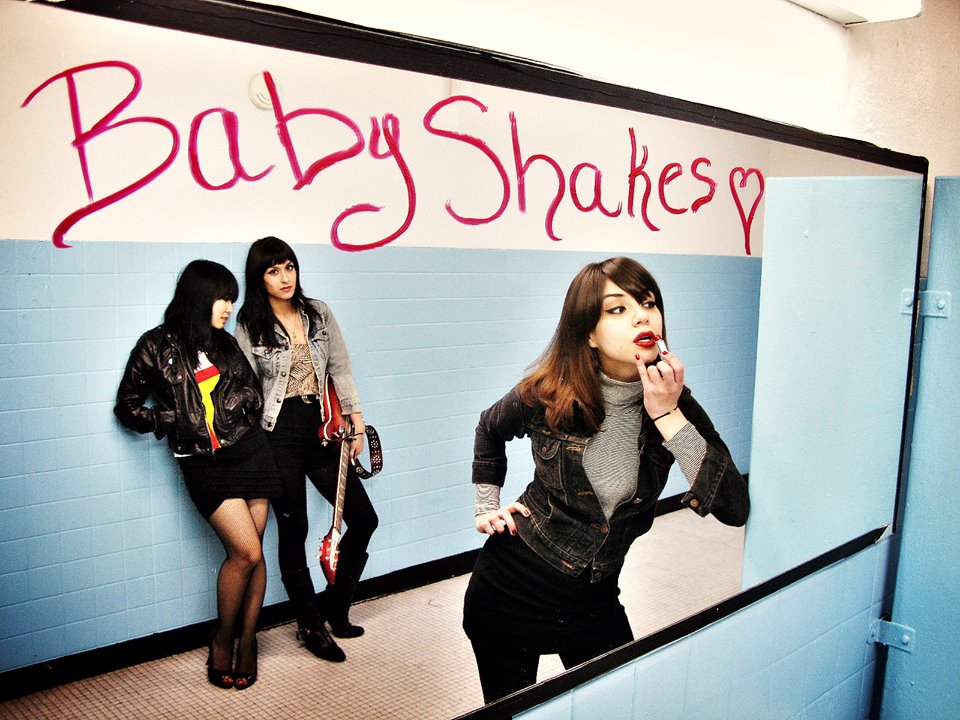 New York based power-pop band Baby Shakes come to Ireland this weekend to play a string of live dates, including the Bello Bar in Dublin this Saturday night (with the Number One’s and Protex). The group recently spoke to the Last Mixed Tape about their new album, ‘Starry Eyes’.

You’re currently touring your sophomore album Starry Eyes. How do you feel Baby Shakes’ sound has changed or evolved since your debut The First One?

This album is a bit heavier, more guitar driven and not as slick as the first one. The production is different, we wanted to capture that raw punk energy that we had when we recorded our first two singles with an 8 track. Suppose we went back to our punk roots but tried to polish the vocals and harmonies so we kept that pop sensibility.

How did recording this record differ from your debut?

This time around we were directly involved with the mixing and production which we feel made a big difference. We were also lucky to have a fantastic assortment of vintage amps and mics at the studio to work with.

As a group what influences the songwriting or the sound of Baby Shakes?

We all grew up listening to punk bands like The Ramones, Johnny Thunders and the Heartbreakers, and The Clash, so of course these bands have always been a huge influence on us. As we got older and started appreciating the classics that we drew our influences from: Chuck Berry, the Beatles, Nick Lowe, the Beach Boys and anything produced by Phil Spector.
We also love glam bands like T-Rex, Slade, and Mud, almost anything Produced by Chin and Chapman in the mid 70’s. Of course we have total worship for the Northern Irish punk scene and also bands from the UK like the Boys and the Buzzcocks. Those bands are our biggest influences but I guess we draw influences from all over.

Starry Eyes has a real live band sound to it. Was important for you as a group to keep it upfront and close to your live sound?

Yes, extremely! We wanted this recording to sound as raw and lo-fi as a band could sound in the studio. We recorded bass, drums and rhythm guitar live on tape. That helped.

Is there a song on the album that stands-out the most for you guys when performing it live?

Guess it depends on the vibe of the show. She’s a Star and Sugar High seem to be crowd pleasers and I’ll Be Alright is always fun to play.

You’ll be playing several dates across Ireland this weekend. What can people who haven’t seen the band before expect from a Baby Shakes live show?

A band who drinks lots of tequila on stage. Haha! We like to have fun when we play, we laugh,we drink, we smile… Don’t know if that’s punk but we enjoy ourselves and rock hard at the same time.

What do Baby Shakes have planned for the near future?

Maybe a few more singles. We’ll be touring Japan early next year as well as Southern Europe. Definitely some shows in the States and if all goes well this time around we’d love to come back to the UK and Ireland . Perhaps we can play London next time around.

Baby Shakes play Warzone Centre in Belfast on Friday August 28th (with Protex), the Bello Bar in Dublin on Saturday August 29th (with the Number Ones & Protex) and Goat’s Toe in Bangor on Sunday August 30th (with Protex). Their second album ‘Starry Eyes’ is out now via bandcamp.