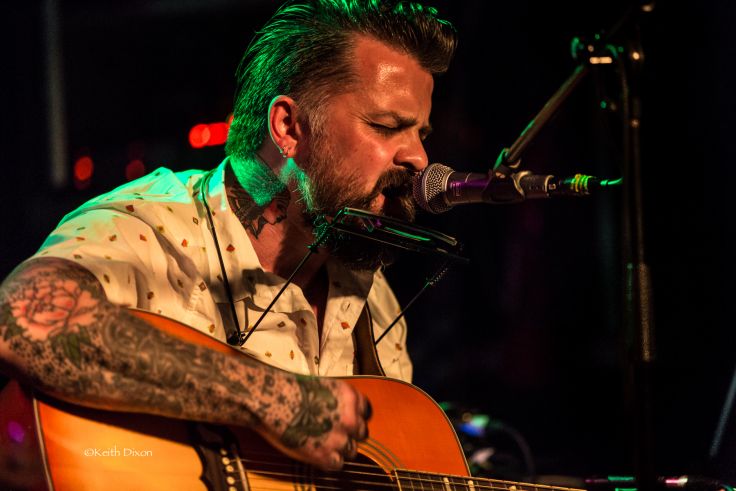 Americana songwriter Jem Mitchell launched his new E.P. with a show at the Odessa Club on Wednesday, June 24th and the Last Mixed Tape was there to review.

Music can tell a story, and depending on where and when you come in it can be an inspiring experience for the listener. Such was the case with Jem Mitchell’s Sweet Amphetamine E.P. launch at the Odessa Club last night.

For it seemed I had come in at the opening of a new chapter, one that had proceeded a great deal of trial and tribulation for the songwriter. Indeed, there was a palpable atmosphere of pride, respect and gladness from the audience who spurred Mitchell on with each passing moment. Even those unfamiliar with the artist’s soul-baring new record could tell this was the story of one man, his passion for music and the people who supported him.

With the dead heat of a summer’s night in Dublin providing the backdrop, Mitchell’s voice howled around the venue as the teeming crowd bustled around him. Demanding attention with the sheer power of his vocal alone, best seen in renditions of ‘Sweet Amphetamine’ and ‘Fragile Heart’, the songwriter commanded the audience from beginning to end with clear, raw talent, backed by the brilliant guitar work of Ken Browne and later joined by Patrick Barrett (the Hedge Schools) and Radie Peat (Lynched).

By the end of the night there was a feeling of triumphant adulation for Mitchell, one the musician shared in return. Sometimes as a reviewer you can be struck by this connection between the act and the audience, and therefore the need to review the music is superseded by a duty to capture the moment and tell the tale. This is rare, and happened last night.

The best way to sum up the entire show (excellent performances notwithstanding) was a moment shared between Jem Mitchell and his guitarist Ken Browne. After playing their final song of the night to rapturous applause the two men embraced as a clearly emotional Mitchell thanked Browne for his support in making Sweet Amphetamine, and as they continued to hug so did the level of applause and appreciation from the crowd before a teary eyed Jem Mitchell turned and thanked the crowded “from the bottom of (his) heart”.

This is what music is about, life, relationships, the past, the present and the future. For Jem Mitchell, it seems, the past has been laid to rest, the struggle to get the present not gone unnoticed, and as for the future? In the words of the late Lou Reed, “the possibilities are endless”.