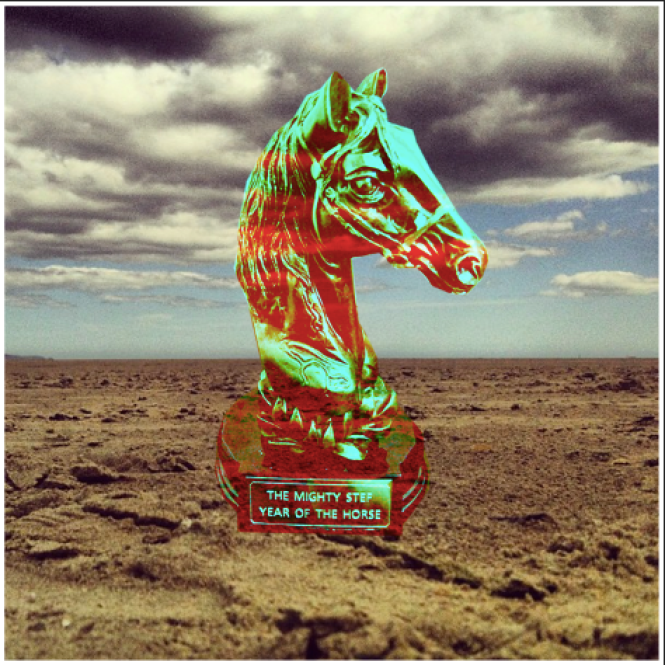 The Mighty Stef return with the uncompromising, sonically vast sound of their new album Year of the Horse.

Opening Year of the Horse with a clear message of intent, ‘Everybody Needs A Grave’ provides a captivating, yet turbulent, introduction to the record. From vast swirling ambience to dynamically jolting choruses, this track establishes the essence of the Mighty Stef’s rejuvenated growth.

Indeed, the record simply exudes creative freedom and vivid vibrancy. Recorded in California with renowned producer Alan Johannes, the change of landscape seems to have found its way into the Mighty Stef’s music.

Reveling in the large-scale production of Year of the Horse, the Mighty Stef play with this sense of space to great effect. Songs such as ‘The Nightwatchman of the Iveagh Flats’ and ‘Stella’ swagger with the sound of the bands’ indie roots, while ‘Horse Tranquilizers’ shudders with alternative-rock rhythms.

The psychedelic flourishes of ‘Fourteen Yellow Sunflowers’ and sonically vast journey of ‘The Hardship’ find the band broadening their sound stylistically, while still keeping Year of the Horse sounding cohesive.

In context, the bone-rattling production and expansive scope of Year of the Horse works as a tidal shift in terms of sound and direction. While still remaining fiercely independent the Mighty Stef have cast away the “underground indie” label that has followed them up to this point, with a bold up-front album that also highlights the band’s clear pop-sensibilities and ability to write infectious hook-laden rock.

With Year of the Horse the Mighty Stef open the boundaries of their music, resulting in a widescreen sound that expands with each reverberant hit and thrashing echo of guitar. With this L.P. the band’s sound is fully realised within Johannes’ untamed production.

Losing none of the group’s feral rock edges, the Dublin act have finally been given the space to build upon their indie influences and move into broader sonic territory. While this process can often result in a “transitional” uneven sounding record, the Mighty Stef keep the music rooted and relevant making Year of the Horse their best album to date.

Year of the Horse by the Mighty Stef is due for release on April 10th.

4 comments on “The Mighty Stef – Year of the Horse”