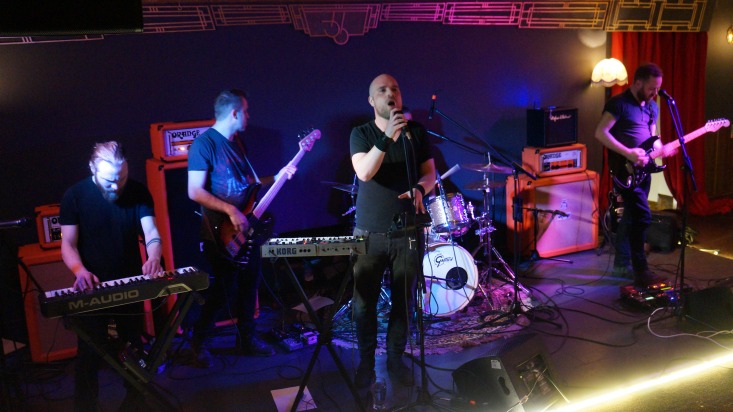 From the very first pounding strike of the drum kit and bone-rattling bass notes it becomes very clear the Spines have sound that has visceral, intense foundation from which the four-piece can use to make an impact during live shows.

Renditions of ‘L.U.C.Y’ and ‘Bite Me’ brought Spines’ ragged take on the noise-pop genre to the fore, and while there were moments when the group slightly faltered these instances seemed to be born out of vibrant inventiveness rather than lack of preparation. An exciting and greatly impressive set from a band quickly gathering momentum.

Following the noise-pop edge of Spines came alternative-rock outfit Able Archer (pictured above). A different prospect in terms of sound, Able Archer’s performance was built more out of a full-on, heavier approach to their music.

Sounding tight and together musically the group brought an added dimension and energy to songs such as ‘Ghost Maker’ in comparison to the slightly subdued production of their recent E.P. The Trouble With Strangers.

An interesting contrast in sound, both Spines and Able Archer showcased a different aspect to their studio work during a pair of impactful live sets. Indeed this was the overall concept of New Wave itself.

New Wave seems to have found a well-placed home within close-quarters atmosphere of the Bello Bar with the differing musical styles (Spines and Able Archer would be followed by sets from the Klares & Radio Room) not feeling out-of-place set against the venue’s unique ambience. It will be interesting to see how this emerging indie night continues to grow and curate it’s line-up in the coming months.