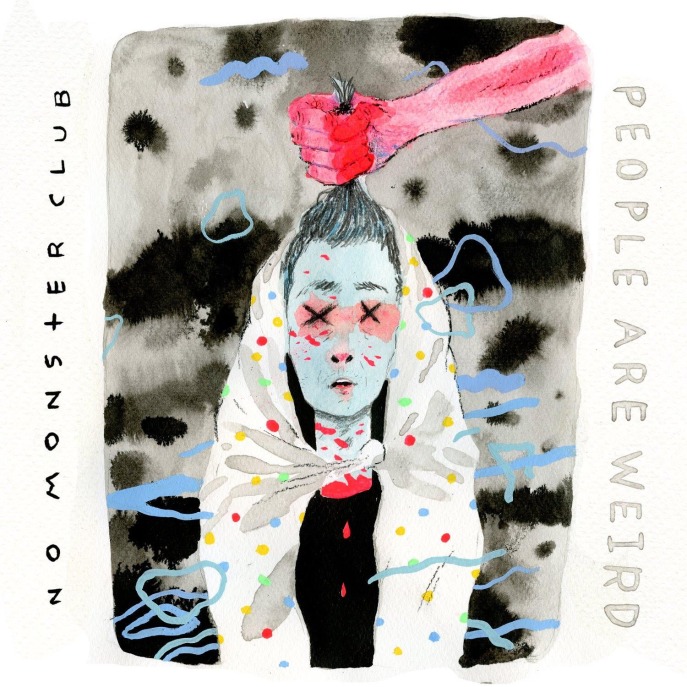 No Monster Club return the undeniably subversive indie-pop sound of their new album People Are Weird.

From the opening repetitive, nursery rhyme-esque introduction of ‘Can’t Get Enough Of That Hippy Dippy Bullshit’ it becomes very apparent that People Are Weird is an album set to subvert and play with the expectations that the indie-pop genre label entails, as well as a definite step up in terms of style and overall sound from their previous L.P. Foie Gras.

Quickly moving form hook-laden melody to all-out lo-fi edge, tracks such as ‘Arms Across America’ and ‘The Loneliest Master’ expand on the central indie-pop structure of Bobby Ahearn’s songwriting is twisted and contorted by No Monster Club’s ability to mesh an array of juxtaposed sounds and styles into their music. This is what makes the band so engrossing.

There’s a raw, unhinged core to No Monster Cub’s music that results in People Are Weird sounding as if the entire album rest on a knife-edge between controlled experimentalism and an unfocused self-indulgence. Happily, Bobby Ahearn and company successfully pull-off this tightrope walk with relative ease resulting in record that flickers with singular brilliance and unexpected twists and turns.

This is no more prevalent than in the album’s stand-out track ‘I’ve Retired’, a brilliant encapsulation of No Monster Club’s vivid take on indie-pop.

Indeed, in a music scene sometimes dominated by, and overtly reliant on, formula (one only needs to look to the recent Choice Music Prize shortlist for evidence of this), People Are Weird is a refreshing unapologetically alternative record that captures the imagination from start to finish.

Joyously manic and bustling with a sheer force of invention People Are Weird is irrepressible in its individuality. Never different for the sake of different, but instead different because of No Monster Club’s naturally off-kilter take on the indie-pop genre. Although we are very early into 2015, it would be hard to imagine a record as singularly vibrant and creative as this.

People Are Weird by No Monster Club is due for release on February 6th.

2 comments on “No Monster Club – People Are Weird”