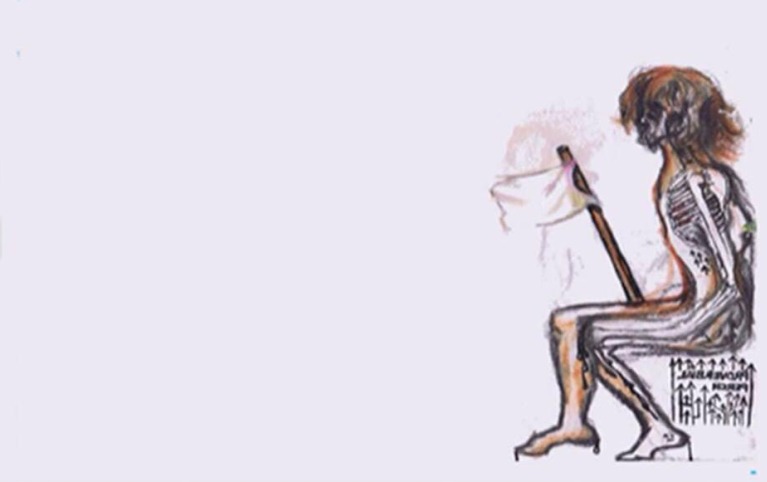 Opening with the spiraling rhythm of ‘Inked on Eye’ Val Normal move quickly to establish the post-grunge and math-rock aspects of the album with the track sitting firmly on a bedrock of sharp dynamic shifts and abrupt changes.

This hard-cut shape to the music continues and defines Fly the White Flag of War with tracks like ‘As They Stood Questioning the Bee (part 1)’ and ‘BLUE!’ crashing into focus as the record pushes and pull in varying directions and styles, moving from brooding grunge to fast paced math-rock in the blink of an eye.

This is nowhere better seen on the album then on the epic closing track ‘Pennysqueezer’, which finds Val Normal at their most interesting stylistically. Creating a tapestry of harmonic ambience to build from, the song twists and turns texturally giving the L.P. a powerful close.

Unfortunately Fly the White Flag of War suffers from many of the flaws and clichéd characteristics of the influences Val Normal so valiantly try to recreate. The record falls under the weight of the melodramatic, out-dated and formulaic sound that has plagued grunge and alternative-metal for the past two decades, and while the group clearly have the musicianship and production right the album ultimately lacks invention and relevancy.

However, this is not to say that both Val Normal and Fly the White Flag of War as a whole don’t show promise. The sheer force of sound from the trio is greatly impressive, and having not seen the band in a live context I can only imagine it’s very affecting in person too. Throughout the album the group showcase a real dynamic style to their music, seen in ‘Pennysqueezer’. All is needed is for the three-piece to bring that energy into a sound that feels relevant to who they are, and not who their influences are.

Fly the White Flag of War is a solid album, and finds its home within Dublin’s expanding post-grunge scene. And while there are flaws, there are also flickers of great promise.

Fly the White Flag of War by Val Normal is out now.

1 comment on “Val Normal – Fly The White Flag of War”