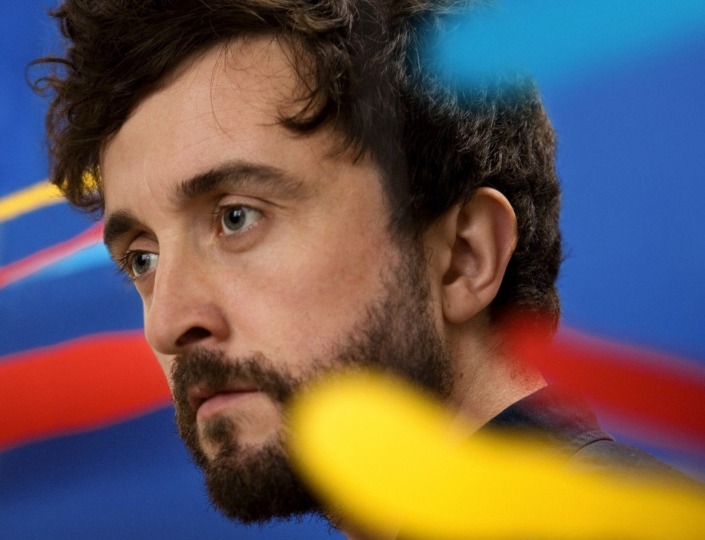 Jape (Richie Egan) returns with his eagerly awaited fifth studio album This Chemical Sea on January 23rd. The critically acclaimed and award-winning songwriter took the time to speak to the Last Mixed Tape about the upcoming record, the vibrancy of the Irish music scene and his process.

“I wanted this album to sound coherent. I don’t think any Jape album has really been coherent so far”. Egan says, reflecting on the concept the songwriter had in mind for This Chemical Sea. “It’s always been an electronic song, followed by an acoustic song or whatever. But with this record I wanted there to be a definite mood from start to finish. I was still writing acoustic tracks, but never with a mind for putting them on the album. Getting ten electronic Jape songs together took a while”.

Indeed this long process seems to come from Jape’s decision to heavily curate his own work. “I didn’t let myself away with anything this time, like I have done in the past.” he comments. “On previous records there would be a song that maybe gets overlooked, and later on when you listen back you find yourself thinking “I shouldn’t have done that” or “I should have went further with that track than I did”. So with This Chemical Sea I tried to push the songs as far as I could push them, to a point where I felt I could do no more and that I had done my best”.

What is clear from speaking to Richie is the commitment, care and time the artist puts into his craft. Talking about his songwriting process he says. “I write everyday, picking bits of those songs and then taking the good parts and putting them into another track, and being really super critical with what I keep and what I don’t keep. One of the things on this album was that my studio is about a fifteen minute walk from my house, and I would constantly listen to the mixes on headphones as I walked there each day. And at any point I was getting bored with a certain tune I would just dump it, straight away”.

When asked if being that critical of his own work is hard, Egan put this approach down to experience. “It’s important, because if you don’t you’ll regret it. I’ve had that in the past. You have to be really clinical, but you learn something from all those tunes. You might even take a line, a beat or melody from that song that will show up somewhere else on the album.”

“It’s the songs that I’ve worked really hard on that people have liked in the past, and the ones that I kind of let go that just ended up feeling like driftwood” he continues. ” So this time I didn’t leave myself away with anything.”

Although Jape’s previous albums have been met with acclaim (including a pair of Choice Music prize awards), the artist seems driven and determined to keep moving forward and evolving. “I see myself as just starting out, really” he insists. “I think in all aspects of life you need to be curious about things. You should never sit around and think “I understand this”, because you don’t. You never will, the older you get the less you know. It’s the same with songwriting. Your always learning. For me songwriting is like trying to understand one certain aspect for just a second, and then it’s gone”.

Speaking about how this outlook is reflected in his lyrics, Richie says. “I try to write from the subconscious. Then I go back and say “that feels true” and get rid of what doesn’t. Because the words that feel true are the ones you can still sing in the years to come. But it’s hard to understand or discern you’re own unique voice I think. For example I can definitely understand someone like Hilary Woods or Bill Callahan, but your own voice can be hard to get a grasp of.”

“But that’s why I love songwriting, trying to take the world, refract it through you, put a little nugget of what you see and it’s the weird little things that you see that will make other people go “Oh yeah, I like that line.”

“And that is what I wanted with This Chemical Sea“. Egan continues. “As I look back on the lyrics now, the one theme that seems to come through is pollution of not only the world we live, but also of our bodies.”

With This Chemical Sea ready for release at the end of January, Jape speaks about the prospect of performing the album live in contrast to recording. “It’s a completely different process. Because when you’ve mixed and mastered the album and everything is ready, you’ve now got to look at how you can make these songs entertaining to people live. If someone is going to pay to see you play on the strength of an album, or even previous albums, it’s your duty to put it across the best you can.”

While Jape is busy releasing and writing his own music, it’s particularly interesting to hear how much of the Irish indie scene he absorbs and listens to, conveying a clear enthusiasm for emerging songwriters coming through at the moment. “I try to listen to as much new music as possible. It’s so inspiring to hear new stuff, even music that’s not really there just yet and you can hear a songwriter trying to get there. That’s really interesting to me as well.”

“I saw Maria Somerville at Other Voices recently” he recalls. “And I thought it was inspiring to hear her and thinking “she’s onto something”, and that she was main-lining the same stuff that I am. They’re the sort of moments that keep you fresh and inspired.”

This Chemical Sea is due for release on Friday, January 23rd (pre-order available via iTunes). Click below to watch the stunning video for ‘The Heart’s Desire’ directed by Conor Finnegan.