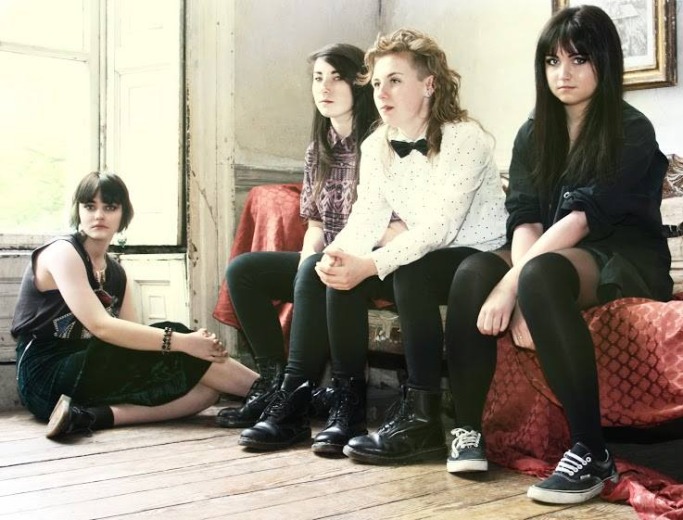 Emerging Dublin noise-pop act Spines have had a breakthrough 2014 so far, with the group quickly capturing the imagination of many on the Irish music scene (culminating their recent single ‘Bite Me’ being chosen for our song-of-the-week feature The Mixed-Tape). This Saturday, November 15th the four-piece will play their first headline show in Fibber Magees. This week The Last Mixed Tape caught-up with Spines for their first ever interview.

How did Spines first get together?

Three of us happened to be playing the same fundraiser gig with different bands at the end of last year and we saw each other play. Ciara (lead singer/guitarist) had wanted to start an all girl band, so she approached Niamh (bassist) and Sinead (lead guitarist) and together, we decided to form the band. We jammed and wrote original material after school in each other’s houses for a few months, while looking for a drummer. In April, we found Tara (drums) through mutual friends, and completed the line-up.

From then on, we got things together, wrote more songs, recorded L.U.C.Y, Creature and Dark Hearts, and ended up playing our first gig as one of the bands on the lineup of a local community centre gig at the end of May.

Was it long before you found the sound you have now or did that take some work?

We share common interests in the music we listen to, so we found it easy to write and play music that we all like. In terms of our sound, we’re still perfecting it. We’re not necessarily aiming for a certain sound or to fit into a certain genre as such – we just want to make music that is entertaining and has meaning and is fun for us to play. As for the sound we have now, we wanted to mix different styles of music in our set list but still have an overall raw personality.

What music would you say most influences you as musicians?

We’re all into lots of different artists and genres, which probably broadens our ideas when it comes to writing new material. In general, we mainly listen to indie/alternative rock. We’re all huge Arctic Monkeys fans, so they would have a lot of influence on us as a whole.

We are also interested in other girls bands such as Warpaint and the Runaways, and lots of underground Irish bands such as Girl Band and of course The Hots Sprockets. In terms of genres, we’re partial to reggae, underground psychedelic rock and garage rock – anything will do, really!

In recent months Spines have begun to make waves on the Dublin live music scene. Has this quick progress taken you be surprise?

Definitely. We never thought we’d get as much recognition as we have so far, especially since we haven’t been around for long. We’ve already been given opportunities to play music showcases in Whelan’s and support slots in the Academy, which is insane – we’re so grateful to anybody who comes to see us play, spreads the word about us or just shows an interest. It means a lot for a bunch of school girls!

You recently release two singles ‘L.U.C.Y’ and ‘Bite Me’, what were the inspirations behind theses tracks?

‘L.U.C.Y’ is a typical love song, we suppose. It’s a story of desire for the only person you’re not suppose to desire, for the dangerous relationship with the person who you know is bad for you (which is why you want them so much). It has a bit of an Arctic Monkeys vibe, and is all tangled up with fascination, jealously and hatred for falling in love – ‘L.U.C.Y’ is all those unwanted feelings.

‘Bite Me’ is a more casual and fun song in terms of its lyrics and style – we think we were going for more of a White Stripes mood with this one. The lyrics are inspired by a dream Ciara had about Jack White actually, he was a vampire and they made out and then got married! Helena Bonham Carter was there too.. Weird and wonderful! Watching too much Tim Burton, we think…

With these two songs now released, can we expect a full E.P. from Spines?

We have recorded a few other songs that have yet to be released. We’re not entirely sure what we are going to do with them yet! But we want to keep people interested so we definitely will release them, just maybe not as an EP as such.

What do Spines have planned for the future?

We’re all in our Leaving Cert year right now, so we want to keep playing regular gigs and keep ourselves out there for now, but at the end of the day we do have to focus on exams this year. The plan is to really focus on the band when the Leaving is finished. We want to keep writing and playing music that we love and get as far as we possibly can with Spines.

Spines will play Fibber Magees this Saturday evening (November 15th). Doors are at 1pm with tickets priced at €7. Click below to listen to their new single ‘Bite Me’.