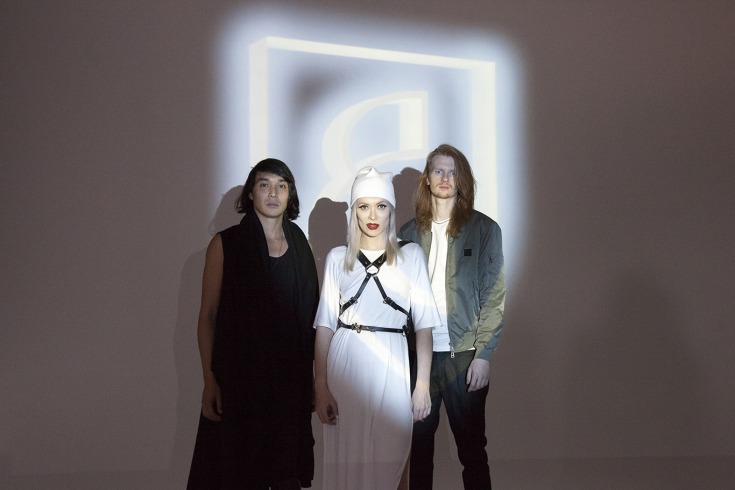 Synth-pop trio Ballet School will play the Workman’s Club in Dublin on Friday, November 21st. The band took the time to speak to the Last Mixed Tape about their debut album The Dew Lasts An Hour and the challenges of performing electronic music live.

Earlier this year you released your debut album, The Dew Lasts An Hour. What can you tell us about the making of the record?

It was made in Berlin using all local studios and also laptop producing. It was just us in our wee naive world making it. No celebrity co-writes , features or collaborations with super producers. That gives it a lot of heart I think because it’s clearly a pop record. Pop records don’t usually get made like that.

As group was it important to make an impact with the album, or was that something that didn’t concern you too much?

We really discipline ourselves away from having any expectations. It’s healthier that way. this industry rarely makes any sense – there’s no meritocracy – the best writers , singers and musicians are not necessarily the most successful.

What type of sounds and influences did the band draw from on The Dew Lasts An Hour?

Is there a particular song on the record that you feel best captures Ballet School’s sound?

Not one song but I really think ‘Cherish’ has something about it that’s special.

With such an expansive sound found through-out the LP. How does the translation to live performance work?

It always worked easily for us cos from the start we made sure not to fall into the trap of being merely a studio band. When you make laptop pop it’s so fun to find all these cracked plugins and layer weird noises and vocal effects but then you get on stage and it just falls flat because laptop producing is not the sane as engineering. None of the resonances are correct for live, you can’t EQ them and you can’t recreate them so you end up with crappy backing tracks.

The first year of touring for almost every internet hyped act is spent trying to figure out how to do the songs live. We expressly wanted to avoid this – the only way to do so is to have seasoned players in the band. Musicianship is something that cannot be overlooked. No matter what technology is on trend. Michel can play all those guitar parts. Louis can play all those drum parts. I can sing all those notes. Our set up is as streamlined and concise as possible. We have an MPC and a Minitaur bass synth instead of a bassist.

We hope audiences can tell the difference. Don’t let the light show and the designer stage outfits cover the fact you are paying to see someone who has only done a handful of shows and can’t project their voice. No shade. Lololol

You’ll soon be playing here in Dublin. What can people expect from Ballet School live?

Expect to have your life slayed.

Click below to listen to ‘Cherish’ taken from Ballet School’s new album The Dew Lasts An Hour. Tickets to see Ballet School live at the Workman’s Club on November 21st are priced at €12.50 via ticketmaster.ie.