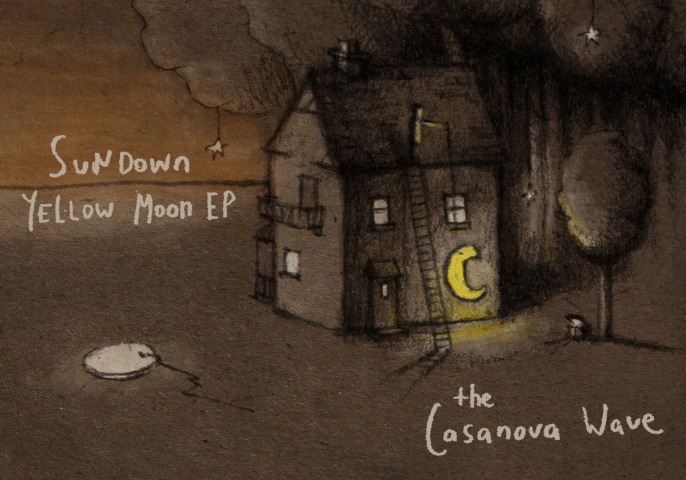 As the pulsing beats and fluorescent synth lines click calmly into focus during the opening bars of ‘New Sensation’ so too does the sense of space and mood of Sundown Yellow Moon.

Featuring a perfectly cast vocal by Conor Deasy (Biggles Flys Again) the track finds both artists merging their equally distinctive styles in a way that feels natural and brimming with joyous imagination.

Indeed, the E.P. seems to be built upon an ethos of casting the right performers to allow the Casanova Wave to broaden both his sonic and stylistic palette. This works to great effect and results in an E.P. that weaves seamlessly through various genre flourishes while also remaining cohesive.

Furthering this collaborative approach the arrival of In The Willows melody drive folk sound during the chiming harmony rich ‘Colours Bursts’ works as a definite progression stylistically, but still maintains the overall mood established in ‘New Sensation’.

Interestingly this is where the E.P. splits in terms of mood, with the more reserved and serene sound of ‘Sacrifices and Comparisons’. The transition is deftly handled, and the trembling melodies of the song, surrounded by swaying rhythms, call back to the previous tracks making the change feel part of Sundown Yellow Moon’s thematic structure.

The choice to have ‘Sacrifices and Comparisons’ and the E.P’s finale ‘The Fear Crescendos’ instrumental also helps the split feel defined and crafted. While the inclusion of Sarah Grimes (September Girls) on percussion maintains the collaborative thread of the record.

With such a two-sided structure it would be easy to conclude that Sundown Yellow Moon is a top-heavy record, front stacked by the pop-friendly first and second tracks. However, with deeper analysis this is not the case. This quick change is organic and actually gives the E.P. a greater, more expansive, sound that feels like a journey rather than an immediate experience.

Sundown Yellow Moon, in broader context, is a microcosm of the stellar creative output happening in Irish music at this moment in time. Understanding this depth of talent, the Casanova Wave chooses the right cast to imbue their own singular styles into his glistening production and vast soundscapes resulting in a elegantly realised record.

Sundown Yellow Moon by the Casanova Wave is due for release on September 12th via Bluestack Records.