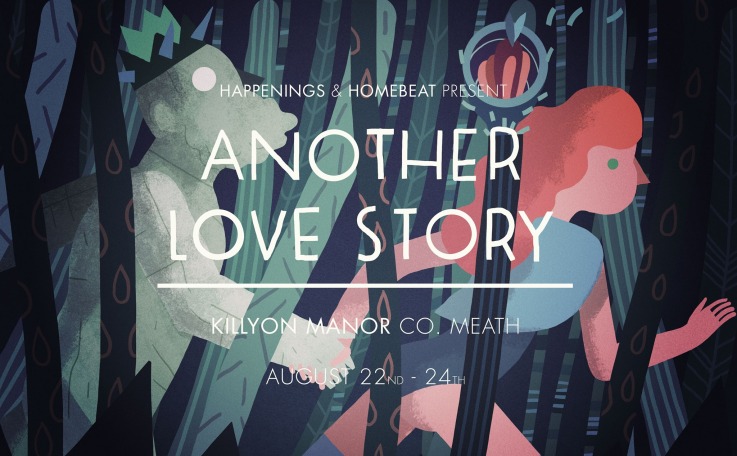 Homebeat have been responsible for organizing and curating some of the Irish music scene’s most unique concerts in recent years. Homebeat are set to collaborate with fellow event organizers Happenings on a 3-day event this weekend (Friday, August 22nd to Sunday, August 24th) at Killyon Manor in County Meath entitled Another Love Story. In the build-up to this Friday, Homebeat co-founder Emmet Condon spoke to the Last Mixed Tape about the event and Homebeat’s origins.

How did the concept for Homebeat first come about?

Well house concerts certainly aren’t a new concept but a few of us lived in a particularly un-damageable house in Clonskeagh where we had a series of fairly epic parties, after each one there’d be a great sing-song and we thought it would be cool to put on a gig there, and so myself and Fergus did and it has just gone from there.

I think on a wider context we were products of the Celtic Tiger years in Dublin where there was so little imagination put into how music was being presented and there just seemed to be a huge barrier between what was going on for us and even in a relatively low-key place like Whelan’s. The scene seemed so closed, and so far away from us, despite the fact that we were massive music fans. So there definitely was a sense of wanting to do something more intimate and something we had more ownership of.

Also, fundamentally there was the knowledge that we were surrounded by so much talent, and that it would be nice to have an opportunity to showcase that.

How has Homebeat evolved over the years since the first show?

The first show was with Monto, a mate – Dave Cruise and our own little band at the time The Beautiful Rooms. It was an exceedingly civilized affair. It seems like light years away, and yet the essence of a lot of what we do is much the same. The underlying vibe is to present music and art in general, in an informal setting that takes away the divide between performer and audience and encourages people to interact in a comfortable manner. What has changed I suppose is the scale of ambition.

Being involved in Mabos was a massive boost for us as it allowed us to produce shows on a scale and a complexity that was impossible to achieve before. It was the ultimate platform for a bunch of creative souls and it is missed dearly for this and many other reasons.

So increasingly, and especially since being involved in Mabos, the drive for me is to continue to move into interesting spaces, not just house concerts, that will always be a part of what we do, but having had a taste of a different kind of space with Mabos I want to keep pushing into places of that ilk, I just find it so much more interesting than going to gigs in conventional venues.

Also, a big bonus in the last few months has been our collaborations with Mark Hearne of Le Tissier on the visual side, which I think gives any show a completely new different dynamic. We just did a showcase inside the castle in the most beautiful of rooms at Castlepalooza the other week, and Mark’s visuals were the star of the show for me. It’s rare to have someone who can perform live in that medium with such vision and deftness of touch. Visuals are so prevalent in dance music, but not so much in more traditional styles like folk or indie, it made me really proud to feel like we were pushing the boundaries a little bit on that day with Mark being involved.

Those things aside, the advent of our two mini-festivals Fading Light and now (next week!) Another Love Story have been and are really exciting occurrences for us.

Is there a particular show or performance that sticks out in your mind?

It’s clichéd to say it but there have been a lot of lovely moments, from the buzz of doing the first one, the sustained loveliness of the house gigs in general, to the rush of the bigger shows in places like Granby Park and Mabos. There’s been a few times we’ve been lucky to catch bands really on the rise and that energy has been very exciting to behold in a small space like a sitting room. Standouts include Come On Live Long, Little Xs For Eyes, Sleep Thieves, Swords, Bantum and Carriages.

But also stuff like our recent tour in Germany & Switzerland with Biggles Flys Again and Jethro Pickett and again, the shows at Mabos, especially the Bantum Homebeat 2nd Birthday was something special, we’re still very much a very small outfit so it’s a real real thrill to see 400 people at one of our shows, I took a moment to walk up the balcony at that and just take it in, it’s what it’s all about.

Homebeat has been a great support to the acts who have performed at shows, providing filmed recordings of performances and introducing up and coming acts to new audiences. How important is it now for artists and event organisers to collaborate and create a unique concert-going experience?

Well first off the video and mixed recording are the product of our husband and wife production team Tony & Kate Fitz, so it’s their hard work and dedication and attention to detail, it’s huge to have people like that involved.

As for being supportive, thanks very much for saying that, I think our idea is to create the right atmosphere for the bands to show themselves in a light that they might not normally find themselves in. There’s a massive difference between playing a support slot to 20 people talking loudly in a bar than playing to 50 people sitting cross-legged staring at you and listening intently.

But the overriding experience of Homebeat has been how lucky we have been with those who have played and those who come along to listen. This was apparent from the get go and the original group have set the tone which as been really beautifully carried through to this day, we’ve made some really great friends through Homebeat and they keep the vibe alive.

This month you will be staging ‘Another Love Story’. What the event’s origins?

I’m great friends with Peter and Sam from Happenings and we’ve been collaborating one way or another for a few years but we knew we wanted to do something significant together which would meld all that we do into one very special event which is what Another Love Story has become. So it just came from that, and the fact that we’re all getting on and starting to think that the big festivals are starting to lose their gilt and glamour for us. Small and special has always been my thought.

The event will take place in Killyon Manor. What can you tell me about the site itself?

Well as with a lot of these things, it was the site as much as our want to do something together that drove the idea. Killyon Manor is a 18th century big house quiet unlike any other. It’s the perfect size for our little gathering of 300 souls and handily complete with a beautiful ballroom that was built on to accommodate a family wedding at some stage.

The read difference in the event is that it really is a very grand house party, there will be no stages outside, all of the events happen in the house, while we are free to lounge on the lawn and roam the beautiful grounds.

The generosity and free spirit of Roland and Zoe Purcell who own the house is just astounding, you couldn’t wish to find better people to work with on such an event. It’s their spirit, as much as any part of the house or what we bring, that will make the weekend special and unique.

What do you hope to be the overall experience for people going to ‘Another love Story’?

Another Love Story is basically the illegitimate lovechild of an illicit weekend spent by Homebeat and Happenings in a decadent Manor in the countryside filled with cutting edge Irish acts such as Lasertom, Katie Kim, Ghosts, Donal Dineen, weird and wonderful whimsical happenings such as a Cosmic Confessionals Caravan and The Teen Crush Shed Of Long Lost Loves along with open air cinema (of course), yoga, Qi Gong, workshops, discussions and food by The Happy Pear.

We are really hoping to carry through the amazing spirit and vibe we are so lucky to have at our own and Happening’s events for a weekend away in the country surrounded by a bunch of friends old and new.

The idea is that the event looks to celebrate all of us in all our glories and failures, the concept of the joy and hurt in love both being represented is really important. We’re all just human, let’s party!

With the Irish music scene as vibrant as it is at the moment, what future plans do Homebeat have in 2014?

The Irish music scene is astounding right now. There simply is no need to be listening to music from anywhere else should you want to. So on a wider scale the plan is to keep our feet swimming in the incredible waters we find ourselves in at the moment – we are very proud to be a tiny part of such a vibrant scene, and we’re really glad to get to work with so many great people.

More immediately the plan is to (gently!) rock the socks off Killyon Manor for Another Love Story, then we take the Homebeat team bus to Electric Picnic where we are curating the Oxjam Tent from 6pm to 4am on the Friday night with a host of our favorite bands and DJs. If we survive that, then it’s onwards towards Fading Light and whatever else we can scheme up in between. Things are moving at light speed at the moment, but it’s a very pretty sight to behold.

Tickets to Happenings & Homebeat present Another Love Story on August 22nd – 24th are on sale now and available via anotherlovestory.ie. For more information visit the events Facebook page. See line-up below.

1 comment on “Emmet Condon interview – Bringing It All Back Home”