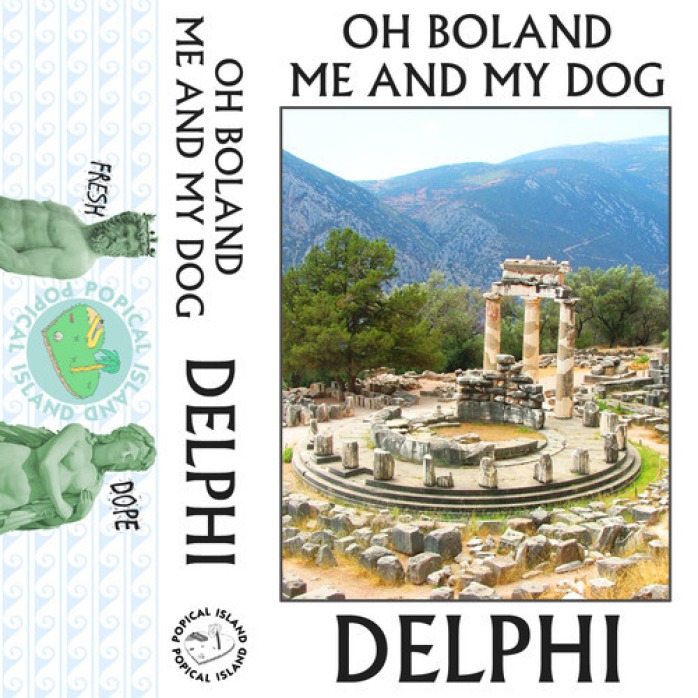 Side One: Oh Boland

Opening with the aggressive jangling of Oh Boland’s visceral garage-rock sound, ‘Tidy Is’ makes the perfect introduction to the group’s dynamic pulsating music and to Delphi itself.

Growling with intensity one moment then nihilistically ragged the next, Oh Boland craft their side of the split L.P with the fuzz-laden shudder of tracks such as ‘Home Truths’ and ‘I’m So Clean’. Carried forward by a vocal tinged in distortion the band constantly shake and expand the sonic boundaries of Delphi.

Imbued with a vibrant melodic aesthetic, Me & My Dog’s infectious take on the indie-pop genre bustles with hook-laden passages and flickering post-modernism.

The swaying, listless charm of ‘I’m Done’ captures the depth of harmony found within the group’s music. Blended through the use of stylish production and offset by harsh biting tones the song pushes and pulls with call and response vocals and jolting guitar work.

However, it is the sublime pop sensibilities and swaggering mood of ‘Better Than I Thought’ that best conveys Me & My Dog’s succinct sound most effectively. Interweaving melodies, booming bass and pounding drums keep the backdrop of the recording moving beneath a brilliantly performed vocal that culminates in a stunning encapsulation of their sound.

Me & My Dog’s indie-pop brilliance and undeniable talent permeates throughout their half of Delphi. Never losing momentum the band continuously capture the imagination with each track.

An album of contrasting styles and approaches, both Oh Boland and Me & My Dog stay true to their respective sounds while creating an album that remains cohesive through its creative feel and vivid ragged tone.

To view Delphi as having a competitive aspect by weighing one side against the other would be redundant, as this never seems to be the point. The record works more as an engaging introduction to a duo of bands just beginning their ascendancy.

Instead the album must be considered in terms of what Oh Boland and Me & My Dog capture within their allotted time and how the transition from one side to the other feels. In this context the duo meld together well resulting in a record brimming with flourishes of brilliance and hidden gems, while still extolling the virtues of both acts respectively.

Delphi by Oh Boland / Me & My Dog will be launched at Popical Island’s venue the Pop Inn, Dublin on June 7th. Cassettes with download codes will be available on the night and afterwards in shops and at popicalisland.bandcamp.com.