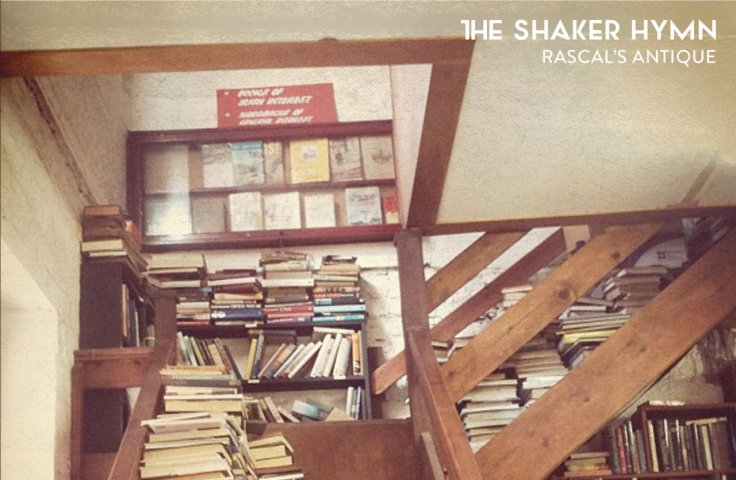 The confident, self-assured swagger of the Shaker Hymn’s music is given a strength and depth of Rascal Antique large-scale production. From the powerfully harmonic opener ‘We Are Wake’ the pounding feel and thrilling scope of the group’s sound moves to a brilliant crescendo that leaves the listener in no doubt of the album’s overall sound.

Showcasing the expansive aspect of Rascal’s Antique dynamic and tonal feel, the lush string laden ballad ‘Caroline’ gives the album more depth in both respects. Great swells of melody and blow-burning percussive allow the breathtaking harmony of the song’s vocal centre sit perfectly atop the beautifully composed recording, highlighting the Shaker Hymns ability to change their music’s focus without slowing down the album or effecting the cohesiveness of the record as a whole.

However, the Shaker Hymn excel when delivering the gritty, scratching groove of songs such as ‘Hang You From Your Heart’ and the arresting grader of the final bars of ‘The Runaway’. The jolting rhythms and aggressive mood of the track exude relevancy, as the group take hold of the listener’s attention through each hook-laden section, bringing forth the group’s pop-sensibilities into the colliding nature of Rascal’s Antique indie-rock leanings.

However, it is in ‘You Taste Like Nothing (On The Vine)’ that the Shaker Hymns hit the pinnacle of their sound. Cracking with a crunching aesthetic, the shuddering tremble of the song’s backdrop moves with each swaying chorus and melodic lead guitar break. Perfectly encapsulating the band’s deeply layered and full-scale sound this track is the key to Rascal’s Antique as a whole.

An energetically confident début from the Shaker Hymns, Rascal’s Antique rattles and hums with indie-rock brilliance as the band show now signs of becoming lost in the sheer scale of a full-length release. Providing many highlights the album is the perfect first introduction from a band just beginning, what could be, a very promising career.

Rascal’s Antique by the Shaker Hymn is out on May 30th.