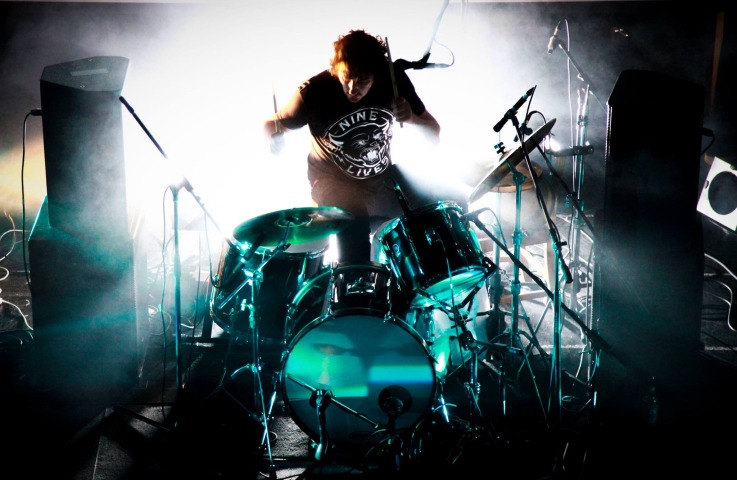 Rarely Seen Above Ground took to the stage to perform a special live performance at the Button Factory in Dublin last Friday night.

With the atmospheric set design  and the depth of field given by the stage lighting capturing the tone of R.S.A.G’s powerful visuals, Jeremy Hickey began the performance illuminated by the highly stylised imagery.

Visceral renditions of ‘Falter’ and ‘Open’ added to the evocative tone of the night, highlighting the musician’s distinctive sound interspersed with percussive flourishes of brilliance. While the more aggressive pounding of ‘Before They Make You Run’ and ‘Stick To Your Line’ shuddered and jolted these rhythmical elements that reverberated out into the expectant audience.

However, the high water mark of the night came with an unexpected turn in R.S.A.G’s performance aesthetic, as the scope of the show took on a new aspect to the musician’s audio and visual art. Sitting behind the all-encompassing stage design and atmospherical lighting that cast the musician in shadow, Hickey moved out from behind the drums and performed a stunning bass driven rendition of ‘The Roamer’, cloaked and augmented behind the large open blinds that surrounded the stage.

With this subversion of expectations, suddenly the concept and theme of the concert came into focus as R.S.A.G’s cinematically tinged sound and affective live visuals melded with the staging, with the stage itself taking the shape of a film set. The synthesis of these elements gave an exciting glimpse into R.S.A.G’s new approach and even possibly the sonic scope of his forthcoming album.

The constantly evolving nature and widening scope of R.S.A.G’s music culminated in a stunning visual representation of the inspirations behind the multi-instrumentalist’s work. With real attention to detail and palpable creativity the show emanated the sonic and artistic sea-change shown in his recent release, Rotate E.P, and it will be interesting to hear how this concept has informed the musician’s new material.