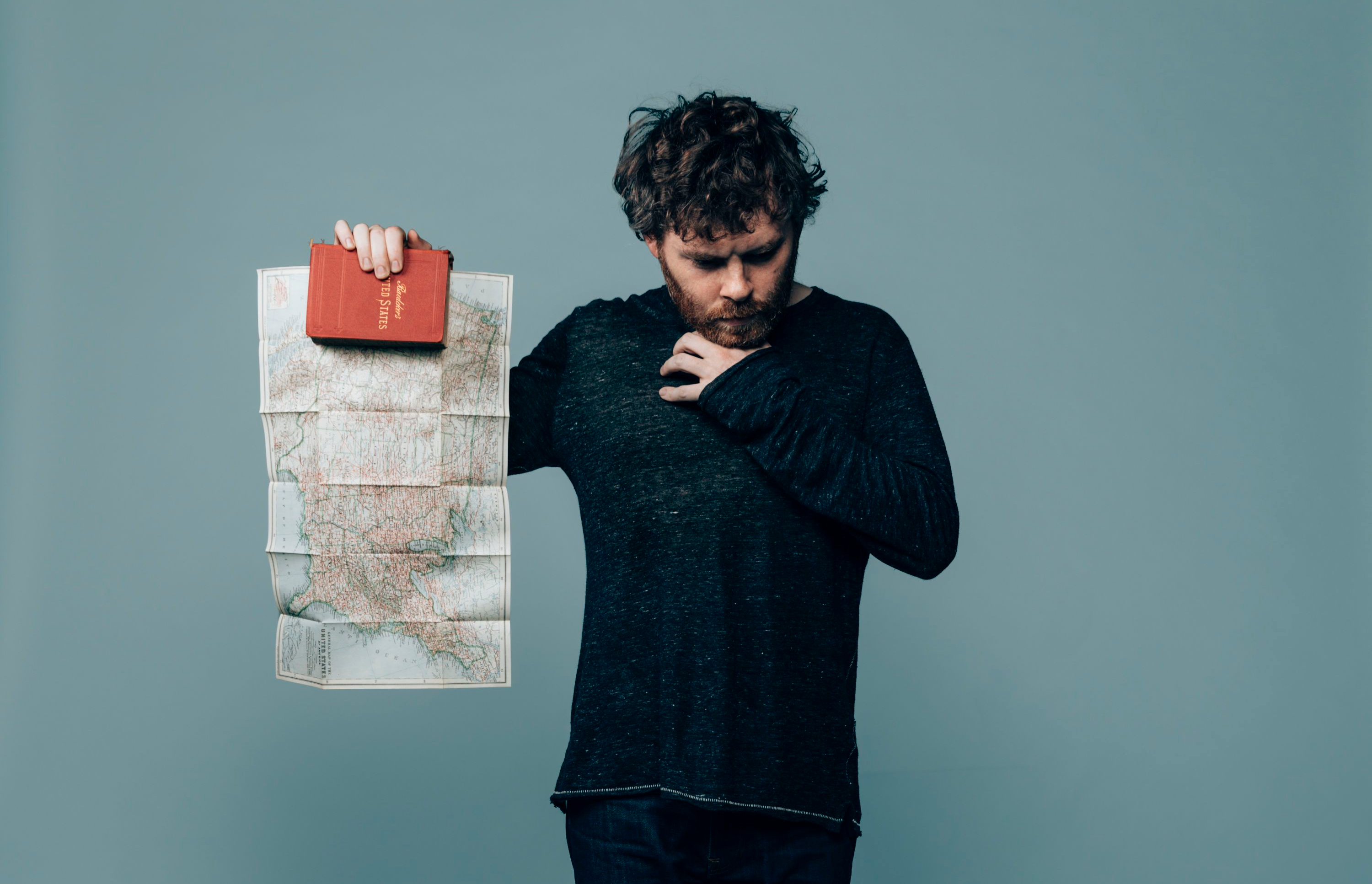 American composer, pianist, and singer Gabriel Kahane will play his debut Irish show at the National Concert Hall next Tuesday night (April 9th) as he tours his brand new studio album Book of Travellers. Kahane recently spoke to TLMT about what he’s listening to, his influences and future plans.

Persuasive Percussion Vol. 2. I have no intention of listening to it—I bought it for the artwork. It’s part of a series for which Josef Albers designed the covers, and I’m trying to assemble a set to have framed. I love Albers’ work, but his prints tend to be incredibly expensive… how he ended up doing these covers is a mystery to me, but I think they’re stunning.

Seymour Reads The Constitution, the title track from Brad Mehldau’s most recent trip record. Before that I was listening to ‘untitled unmastered’ by Kendrick Lamar.

The totality of nature and human existence. Increasingly, I find that I’m trying to take a long view of how we arrive at a particular moment, culturally or politically. I’m less interested in diagnosing or wringing my hands about the present. If we’re to make a more just and equitable society, we have to have the patience to dig deep to understand how we got here. I think artists can play a significant role in that work. To that end, I read a lot of history, and more broadly, non-fiction, when I’m working on music.

Architecture also gets me going, I think because a great building can feel to me like a map of a piece of music. Composers talk obsessively about the architecture of music, how ideas and themes are spun out into a whole that is legible to an audience. Looking at buildings and how we move through them can be tremendously helpful for me. The same goes for theatre – I am often writing narrative forms as a songwriter, and I look to playwrights to see how they manage storytelling and psychology on stage.

You travelled across America whilst writing your new album, how did that change your music and outlook?

I actually didn’t do any writing while I was travelling. I just had conversations with people. I had written a dozen and a half songs before the train trip and was mostly looking for a kind of narrative framework to tie the album together. But when I got home, I realized that I needed to start over again. There was so much richness in the conversations I had.

I think I came away from my trip with the sense that while there are serious differences that polarize the American body politic, a lot of that polarization is amplified by industries that profit from that division, and from a political establishment that is able to consolidate power when working people are divided. I don’t mean to sound Pollyana-ish. Racism, bigotry, and sexism are cancers in our society, and the Trump era has torn a bandage off of a series of old, festering wounds in America. Still, I felt a kind of optimism sitting across from strangers and being reminded of what we do share: deep loyalty to family, awe at the physical beauty of the landscape, a general friendliness that permeated just about every conversation I had. Now, I have to acknowledge that my white maleness indubitably played a role in how I experienced my travelling companions and how they experienced me. I can’t imagine what this trip would have been like, or if I would have felt comfortable taking the trip, were I, say, a woman of colour. But as long as I do hold this privilege in this case, the ability to blend into a crowd in a fairly neutral way- I think using it to try to cross a cultural divide has value.

As to the music: I think this is the humblest, most plain-spoken album I’ve made. In the past, there’s sometimes been a “look what I can do” quality in my music that has detracted from its emotional power. I think that in trying to give voice to the people I met on my trip, I was able to distil without simplifying my own voice.

How does your music or performance change from studio to the stage?

I think I definitely take more chances in a live setting. I’m always interested in trying new things vocally in concert, and the acoustics of a particular hall plays a huge role in determining how that plays out. The studio is about documenting a work of art, but in the live setting, the art is just a means of creating communion, community, some shared ritual experience.

You’ll be playing in Dublin soon. What can people expect from your live show?

I’m so so excited to be coming to Dublin. I’ve never been. The live show will be equal parts funny & sad. I’ll be singing the new record, plus older material, as well as some brand new songs from a cycle in progress called “Twitterkreis”, where I’m setting tweets to music. It should be a fun evening.