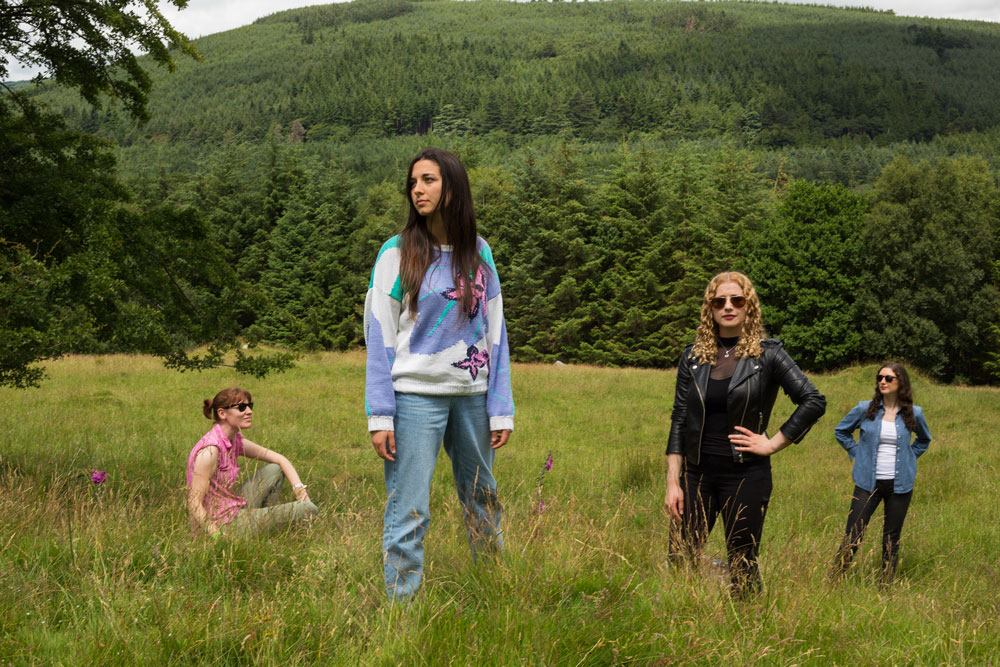 Other Voices is set to take over the scenic surrounds of Ballina, County Mayo later this month (September 28th – 29th) featuring a wide array of exciting acts including Dublin shimmer-pop group Montauk Hotel. The band talk to TLMT about what they’re listening to right now, Other Voices itself and their future plans.

Claudia: A tune by Stan Getz called ‘Stan’s Mood’
Karima: ‘The Tiger’ by Alica Phoebe Lou
Shell: Masseduction by St. Vincent. Absolutely love the sexy guitar lines in this tune!
Aoife: This morning on my way into work. I was listening to Death Cab For Cutie’s new album so it was one of those tracks.

Shell: Our wonderful friends Beauty Sleep never fail to get me up for a dance! If anybody has not seen them live yet be sure to get down to see them! Dott are also a must-see on the lineup, their song ‘Wedding Song’ is one of my favourite Irish songs of the moment.
Claudia: Villagers, an awesome songwriter and lyricist.
Aoife: Beauty Sleep. I’ve seen them a handful of times now and they’re a great live act. There’s a lot of energy in their music and you can get lost in their dreamy synth beats!
Karima: Beauty Sleep!

What do you think makes Other Voices such a special gig for artists to play, whether it be at Electric Picnic, Dingle, Ballina?

Claudia: I think the setting and the atmosphere around Other Voices is something magical and special. It’s a real gem for quality music and there’s something intimate about it that makes it very unique.
Shell: Other Voices has always been such a dream for us! The fact that it is always in a small town really brings the focus onto the music. As Cloud said, it really does create such a magical atmosphere that really catches everyones attention. It’s so exciting to see it expand to Ballina this year.
Karima: It has such a great reputation for showcasing worthwhile Irish musical acts and it is an honour to be asked to take part in it along side other talented Irish musicians.
Aoife: Other Voices is a big deal within the Irish music scene. Most of us have watched it on tv for years. For me, I’ve always been blown away by the setting and how it’s shot. The Church in Dingle is iconic as well as the beautiful landscape scenery that surrounds it. It all comes together in a lovely package that makes Other Voices truly stand out as a powerful platform for the Irish music scene.

Karima: Our last single “Hands” never gets old, I still feel a fresh sense of excitement whenever we play it.
Claudia: Probably Stains, though Hands is the one people might recognise the most as it’s our latest single.
Aoife: We’ve been working on a new song called “White Billboards” and I’m really enjoying playing it live. It’s quite a powerful belter. We played it at Electric Picnic on the Salty Dog stage (which was my personal favourite gig to date) and the crowd reacted really well and took part in a call and response section. There was a great energy about it all.
Shell: I always look forward to playing Stains on our set! We have some new songs that we have only added to the set too so it’s been great seeing the early reactions to these ones.

Shell: We are recording a brand new single later this month and we will be releasing it in October. We are also doing a homecoming gig in the Workmans Club in Dublin on October 26th. We have been gigging playing a lot of gigs and festivals outside of Dublin this Summer so this should be a special one!
Cloud: And after all that it will be writing writing writing!
Karima: We will then be recording and working on a new EP for next year!

Catch Montauk Hotel as part of the Other Voices Ballina Music Trail on September 28th – 29th. Tickets for the St. Michael’s Church TV recording performances cannot be purchased and will be given away through competitions in national and local radio, press and online. All ticket competitions will be announced in advance at othervoices.ie.