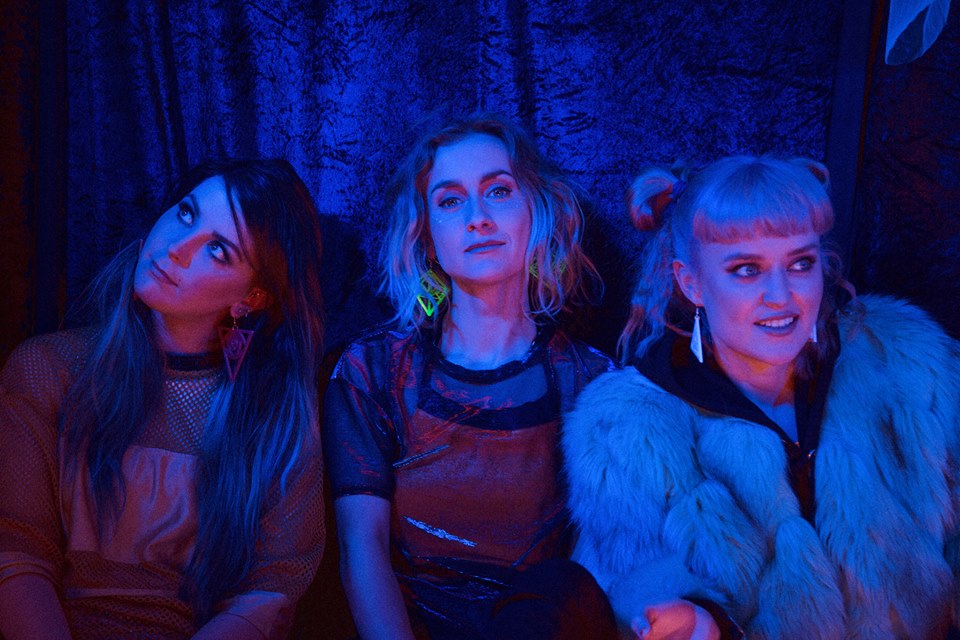 Having just released their brand new single ‘I Love You, Sadie’ and announced an intimate headline show at the Grand Social next month (Friday, August 25th) alternative-pop trio Wyvern Lingo took the time to speak to TLMT about their upcoming debut album, gender stereotypes, special plans for the single’s launch gig and social activism.

Wyvern Lingo have achieved much in the almost three years since TMLT reviewed the trio’s debut E.P. What The Widow Knows. They’ve sonically changed direction with Letter To Willow, garnered considerable attention from the Irish music press and just recently topped the Whelan’s stage bill at Longitude 2017.  Now, sitting in a Dublin’s Wigwam bar on a hot July afternoon, Karen, Caoimhe, and Saoirse all discuss the band’s past, present, and future.

“It’s funny that you say we’ve come so far so quickly, and we have, but I guess in our own heads it feels like a really long time. We’ve put everything into these past few years,” recalls Karen Cowley about the work Wyvern Lingo have put into getting where they are right now.

Speaking about how the group’s music has grown since their indie-folk inspired early days, drummer Caoimhe Barry says “When we did the first E.P. we weren’t a band full time. We’re very proud of it, but we were nowhere near the sort of band we wanted to be. A big that changed was deciding we wanted to be a full time and give it a go and asking ourselves what music do we like? What do we want to make? I think now we’re getting into our stride. We loved working with our producer WIFE, we had such a great time. Everything fell into place”.

“That journey has been brilliant, we were young in our tastes back then. It’s funny how differently we’d do things now.” insists Karen. “We know the sound we want to go for now. We’ve taken the reigns a lot more in terms of production. That’s important to all of us, being able to shape sound”

‘I Love You, Sadie’ the first single to be taken from the forthcoming debut L.P. has not only seen Wyvern Lingo further explore their music with more R&B/alternative-pop influences, it has also seen the three-piece address social issues through their lyrics such as gender stereotypes.

“I know a lot of guys who feel there are parts of themselves they have to hide as to fit into stereotypes,” explains Caoimhe. “I think women have a lot scope in that area. We can dress in men’s clothing and nobody would bat an eyelid. There’s definitely a lot of other area’s where’s that’s not the case, but in this regard, we have a lot of freedom. I think masculinity is a very small space. So it’s about making the mentality of being yourself more common place”.

“I’d say 50% of our band practices are us talking, discussing issues that would be in our minds and articles we’ve read.” Karen includes. “Especially feminism and female identity. So it was great when Caoimhe came to speaking about male identity. Nobody is a caricature of a stereotype, so this song resonates with people. It’s also a really positive song, and we don’t have a lot of those (laughs)”.

Indeed, the ability of each member to express themselves artistically has become a central characteristic of the band. “Lyrically it can be hard for us to find something that all three of us are feeling as songwriters together. We’ve tried that before, and it didn’t work. So we let each other have their own voice” says Caoimhe.

“That feels more genuine.” reflects guitarist Saoirse Dunne. “We all have different ways of doing it, it could be a lyric or I have a riff. It’s kinda bits and bobs, some have been written just in the studio to”.

In their time rising through the Irish music scene, Wyvern Lingo have shown a connection to their audience that the group will look to convey during the ‘I Love You, Sadie’ launch gig next month.

“We want to welcome people to our world,” Karen says excitedly. “We have a very strong bond the three of us, so for the launch gig, we’re going to have a secret after-party that everyone who’s bought a ticket is invited to. Tara Stewart will be DJing, and we’ll be DJing too. O Brother craft beers from Bray will be giving everyone a free taste as well.”

Saoirse adds, “We wanted to make this gig small so we could do this and get to know everyone who has supported us. We’re so grateful for that”.

The band’s willingness to discuss social issues has also seen the trio get involved in various political campaigns, including an appearance at a Repeal the 8th fundraiser at the Olympia Theatre alongside Lisa O’Neil, Neil Hannon, Loah and others. Talking about the importance of getting involved with social issues Karen explains “When you have a voice absolutely use it. I’m personally involved in work with the refugee campaign and through the band, we’ve tried that out there”

Cowley continues “We were at the awards for 30 under 30 last week. There so amazing young women doing incredible things. One woman, who is a human right activist, said during her speech that anyone can be a human rights activist in their everyday life. That was very inspiring to listen to”

“We also are big supporters of ethical clothing, and that will start to come into play with our merchandise,” Caoimhe adds. “As a group of friends and band that are a little bit in the public eye, we just try to be as little of a pest on the planet as possible. In our own way, and by being sincere about it”

Wyvern Lingo will play the Grand Social on Friday, August 25th. Tickets are priced at €17.50 including booking fee are available now via Ticketmaster.ie. The single itself is out now via Spotify.