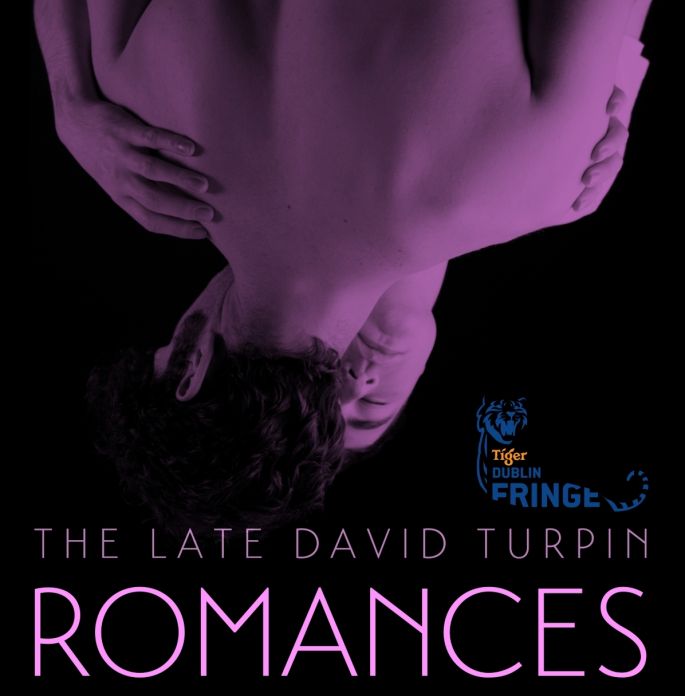 The Late David Turpin will perform a one-off show entitled ‘Romances’ as part of the Dublin Fringe Festival next week (Thursday, September 17th at Project Arts Centre). David recently spoke to TLMT about the concert, his new material and the themes behind ‘Romances’ itself.

Romances showcases your first new material since your album ‘We Belong Dead’. What made you decide to premiere it in live/festival context rather than the conventional online/record route?

In the past, I’ve always made the record first and worried about playing it live afterwards – and I just wanted to do things another way this time. Romances is a very different undertaking for me, because it involves so many collaborations – with singers, producers and instrumentalists, many of whom I’ve never worked with before. In recording, everything can be very diffuse, and different people can come at different times – people can duet, for instance, without ever meeting. That’s a really exciting process, particularly for a very introverted person like me, but it also begs the question of how a record like that can ever be made flesh, so to speak. It’s interesting to see how something that’s quite incremental and fragmentary becomes a spectacle when you translate it into the live context.

On another level, it’s really interesting for me to premiere Romances as part of the Fringe, because the festival is celebrating its 21st anniversary this year – and it’s also 21 years since the death of the filmmaker Derek Jarman, whose work has been a strong sidelong influence on this music. There’s a kind of poetic relationship there that I was interested in mining into, although I can’t quite explain what it is.

We Belong Dead dealt with very definite themes of nature, and humanity’s relationship with the wild etc. What are the themes found within Romances?

We Belong Dead was a very focused thematic record, and the sound of the songs came after that. I came at Romances from the other direction – I was really preoccupied with certain kinds of sounds, and the themes revealed themselves that way. I kept finding myself drawn to these stately, urbane rhythms, and kind of neon-tube lit atmospheres – which was a big change for me, because We Belong Dead was very focused on non-man-made environments. Out of that came the idea that these songs would be about love, and about the erotic – about things that happen between human bodies and minds.

Essentially, We Belong Dead was a statement about the unviability of human life on earth – I still believe that human life is unviable, but there isn’t really any more I can say. So I wanted to go back, and look at more interior subjects – to be microscopic instead of macroscopic. And in doing that, a different kind of political idea came out of the songs, which is that the normalisation of gay life might lead to the erasure of a certain kind of romanticised, exoticised gay culture – what some people might call ‘camp’. I think there’s a lot of beauty in that culture and I wanted to celebrate it, and to respect it. There’s a great moment in Andrew Holleran’s book Dancer from the Dance, in which a character extols the virtues of the ‘doomed queen’ as a subject. Nowadays, everybody is very excited about gay sportspeople and so on – implicitly, I think, because they’re a normalising presence, at the opposite end of the spectrum of doomed queens. Good for them, but I’m not forgetting the doomed queen, I still want to know about that life, and how it feels and sounds.

Speaking very generally, we’re at a moment in gay history, and not only in this country, when certain great steps forward are being misinterpreted as grounds for forgetting a painful history. In a few parts of the world, the twenty-first century is probably a better time to be sexually ‘other’ – but that shouldn’t mean that we file away the tragedies of the past as being irrelevant to the present. I’m interested in the past, but I’m not interested in nostalgia or escapism – and I’m mystified by people who can only understand an engagement with the past in those terms. For me, the belief that ‘now’ is the only important time is the height of escapism – it’s a way of living without context.

What was it about the subject of Romance/Love that made you want to write about it now?

Musically, it had something to do with wanting to write material for other voices. The songs are about the way love and romance give us an escape from ourselves – from the prison of our bodies, from being only ‘me’. There’s a tremendous amount of reverence for the ‘lone creator’ in music – the person who writes everything, performs everything, and sings only about him or herself. That can be really interesting, of course, but it can often be masturbatory – and it’s difficult to make a serious argument for masturbation as preferable to romance. I wanted to present a series of collaborative songs that felt like a series of love affairs.

Also, I’m working with a lot of male singers, which I’ve never done before. In the past, the only male voice I’ve ever written for was my own, and I worked with female voices wherever possible. The female voice is still at the backbone of this new music, but I wanted to see what it would be like to put music in the mouths of men – particularly because that ‘lone creator’ cult is so often fixated on male artists. It made sense to me, then, that the songs would be about romance – because we so persistently see the term ‘romance’ used as a way of denigrating subjects that are perceived as being of particular interest to women. I wanted to puncture that fallacy.

You have an eclectic cast of performers joining you as part of the show. What were you looking for from the cast, and what did they add to the show itself?

When I work with other people, I always try to ask them to do something I could never do, as well as something they wouldn’t do themselves in their own work. The tone and the feel of the new music is very specific, so having all these different voices – Bear Worship, Elephant, Gar Cox, Jaime Nanci, Martin McCann, Samyel, Tonnta and Veda – is a way of constantly shifting the perspective, while working on the same themes. It’s also a way of seeing these performers in a new light – for instance, I love Elephant’s music, and his new album is terrific, but I think this is probably the only context in which you’ll see him singing an electronic R&B song; similarly, I love Veda’s drag show, and I think it’s the best entertainment in the city, but I also wanted to create a context in which the focus is on her as a musician.

Then, of course, we have the special surprise guest – who I think will be a genuine surprise to a lot of people. Some people have been hypothesizing about who this might be based on my past shows, but they’re barking up the wrong tree. I have never performed with this person before.

The poster for Romances (pictured above) caught media attention earlier this summer when it was “disapproved” by Facebook. What was your reaction to this? Did it surprise you?

I suppose this is the case for many people, but whenever I see a kerfuffle like that, I always assume it was engineered for attention. So, I was genuinely surprised that a situation like that could arise inadvertently. When the poster was shot and designed, there was never any inkling that it might be considered salacious, and I still don’t see exactly what it is that drew that reaction. Facebook ignored my inquiries about it, and I still don’t know whether the decision was made by a person or by an algorithm. Some friends have suggested it’s because the figures are both male; others have said the image is more suggestive because it’s displayed upside down. Ultimately, whatever caused offense is an assumption or an implication – and I don’t really feel Facebook, or anybody else, is able to legislate for that.

What can people expect from this show in comparison to your previous live performances?

I haven’t done a show in a theatre for two years, and I haven’t done a show at Project for three years. I’m really relishing the opportunity to create something that’s a self-contained environment – an imaginary world in which the songs take place. The lights are very important to creating that feeling, and I’ve been working with a great theatrical lighting designer, Kevin Smith. Technology aside, there are all the guest performers, so the show is constantly changing shape. No two songs are performed in the same configuration.

What do you plan to do with the music (or indeed the live show itself) of ‘Romances’ once the show is over?

This is my only show this year, and then I’m back into the basement to work on the album. I suppose I’m an anachronism in that the unit of thought for me is still the album, as opposed to the EP, or the solitary track floated out into the ether. I guess, in this case, it’s because so much of Romances is about creating tensions and parallels between different vocalists, and different types of delivery. The songs each mean something in their own right, of course, but they start to mean more when you put them alongside one another. I think that’s the purpose of the album form, and I’m glad to keep working in that form, even if it’s dwindling commercially.

As the album shapes up, I’d love to perform it – but with a diverse cast like this, it’s very difficult to get everybody in the same room at the same time. So I’d say that anybody who’s interested in seeing this group of performers should probably get in to Project on September 17th, because I don’t anticipate Romances being performed by the same people in the same way again.

Tickets to see ‘Romances’ by the Late David Turpin on Thursday, September 17th at Project Arts Centre are on sale now via fringefest.com.