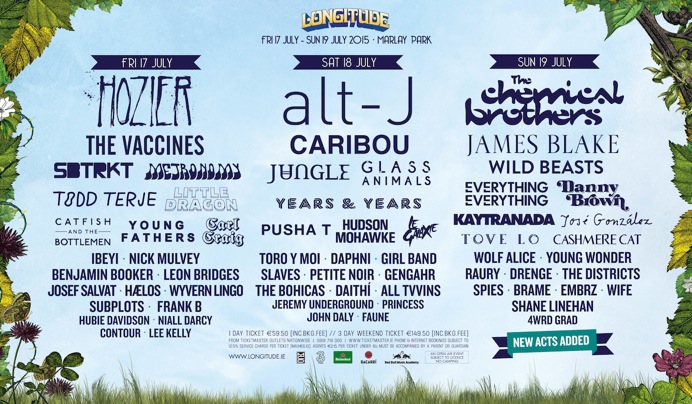 Young Fathers – Friday: Heineken Stage @ 6.45pm
Young Fathers’ latest album White Men Are Black Men Too ear-marked the hip-hop trio as a force to be reckoned with. Their set at Longitude will be no different.

Le Galaxie – Saturday: Main Stage @ 4pm
Le Galaxie are currently touring their acclaimed new album Le Club. Always ones to put on a show, the group’s set at Longitude will be something special.

Pusha T – Saturday: CANCELLED
Hip-hop artist Pusha T gears up to for the release of this new album King Push with an appearance at Longitude this Saturday. His previous record My Name Is My Name included the seminal ‘Numbers On The Board’ single (see playlist).

Glass Animals – Saturday: Main Stage @ 5.15pm
Glass Animals return to Dublin for what will be yet another show-stopping performance. They play the Saturday of Longitude 2015.

Caribou – Saturday: Main Stage @ 7.45pm
Caribou takes to the Longitude stage this Saturday night in support of his latest, critically acclaimed album Our Love, released in 2014.

Featuring X – Sunday: Dirty Old Town Speakeasy @ 3pm
Up and coming indie-pop group Featuring X have impressed me during live shows on several occasions of late. The band’s transition to a large-scale festival line-up is a natural one.

Wolf Alice – Sunday: Whelan’s Stage @ 8pm
Wolf Alice bring their live show to Dublin this Sunday at Longitude. The band’s debut album My Love Is Cool is already one of the stand-out records of 2015.

Spies – Sunday: Whelan’s Stage @ 4.15pm
After producing one of the E.P’s of the year so far with Sea Creatures, Spies bring their turbulent alternative-rock sound to the outdoor setting of Longitude festival in Marlay Park this Sunday evening.

Tickets for Longitude 2015 are available to purchase now from ticketmaster.ie and are priced at: Weekend tickets €149.50 / Day tickets €59.50 (including booking fee). For more information on this year’s festival visit longitude.ie.