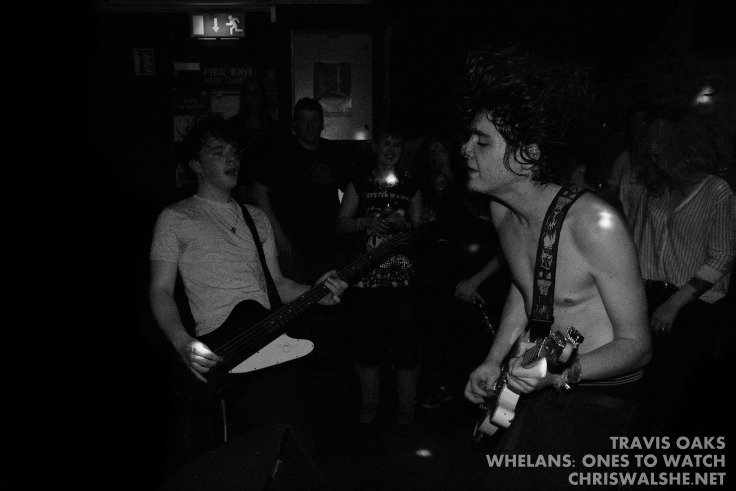 Annual music festival Ones to Watch returned to Whelan’s last weekend, showcasing a myriad of the country’s most exciting new artists.

With this year’s festival boasting over 60 acts in all, many bands sought to single themselves out with energetic performances. None more so than Travis Oaks, whose late Friday night set became a talking point for many at the event and laid out a marker for the band’s own prospects in 2015.

Indeed, the plethora of artists on show did (at times) highlight the importance of being rehearsed and ready for the Whelan’s stage, with several acts looking unready or under-developed especially in comparison to the more established groups.

However, attention grabbing acts like Columbia Mills, Youth Mass, Dear Desert, Mongoose, Elastic Sleep, Staring at Lakes and Women’s Christmas all seemed quite at home with both the overall vibe of the festival and the venue itself, adding to the vibrant creative edge of the event. With Elastic Sleep giving one of the most impressive sets of Ones to Watch 2015 in particular.

Always one of the most gratifying aspects of an indie festival like One to Watch is the unexpected act that as a reviewer I hadn’t seen in a live context before. With that in mind folk group the Evertides, electronic producer SlowPlaceLikeHome, indie-folk duo We Raise Bears, electronic band Aoife Underwater and alternative-pop songwriter I Am Niamh all providing these moments with stand-out sets with their own distinctive styles and differing approaches to their music. A characteristic that dominated the festival as a whole.

In a broader context Ones to Watch highlighted the rich diversity of the Irish music scene at a grass-roots level, going into 2015. Over the course of four days the festival moved from indietronica to alternative-rock, from dream-pop to blues, and from folk to electronica, while still finding a cohesive thread between each artist.

While there were performances that felt unprepared, unready or even nervous, Ones to Watch contained several stand-out moments that gave the festival an added relevancy, and once again established the annual event as a strong marker going into the next twelve months.

A festival filled with unexpected gems, strong statements of intent and simply stunning live music Ones to Watch 2015 delivered on exactly what it set out to do and brought the current eclecticism of the Irish music scene into focus.