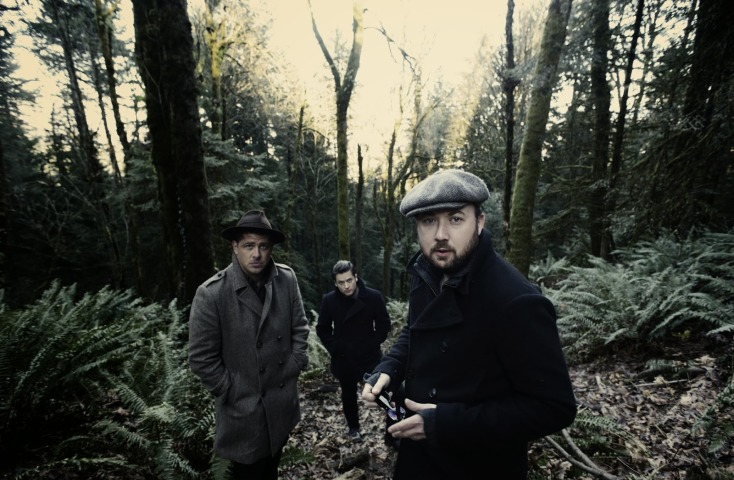 “The first record was born out of action” Rob recalls about the making of Augustines’ debut album Rise Ye Sunken Ships “It had a tragic subject matter as well, the new album is more hopeful. It was also recorded over a shorter period, about five weeks of writing and six weeks recording with Peter ( Katis, the L.P’s co-producer).”

Indeed the band’s sophomore release finds the trio on more immediate and up-lifting ground. Speaking about what inspired the sound of the record Allen comments: “You’re always inspired by what’s around you at the time. After releasing the first album we went out and toured those songs a lot, and some of them are very dark. After a while, like anybody, you grow out of those feelings. You grow as a person. This album feels more like a celebration of that”.

With Augustines feeling this new rejuvenated, celebratory mood it didn’t take long for their second L.P. to take shape. “I think ‘Cruel City’ and ‘Now You Are Free’ kind of stick out to me” Allen says about which songs started to define the album during recording. “I think I could really relate to those two lyrically. It was also a lot of fun, playing that opening in ‘Cruel City’. I think we could tell where we going with that track, straight away.”

As Augustines’ tour continue the up-lifting tone and feel of their current album, as well as revisiting track from Rise Ye Sunken Ships. “It’s rewarding to play the new songs. We actually recorded them a good while back, so it feels like we’ve had them a lot longer. I love playing the old stuff as well, along with the new.”

Speaking about whether or not Augustines have any new material on the horizon Allen states: “It can be very difficult to write on the road. You’re constantly moving and working, sound-checking or traveling. It’s a very difficult actually. But when we do get the chance we get out the laptop and work on ideas when we can. I think we’ll be getting back to the studio soon enough.”