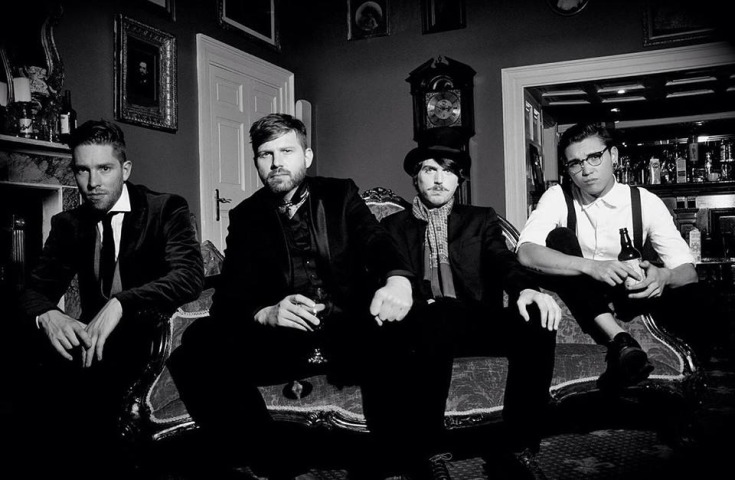 Dublin alternative-rock act Acrobat are set to release their sophomore E.P. Flux this Friday (October 31st). With the addition of two new members the group have undergone a change since their first release Follow You Down earlier this year. The band met with T.L.M.T in Dublin’s No Name Bar to speak about the record.

“The sound of this E.P. is the sound of a different band” says vocalist Mark Healy about Acrobat’s new E.P. “The first record was done in August of last year and came out in April, in the time between that Jacob (Koopman) and Conal (McIntyre) joined and they brought something completely different to the band. Both of these E.P’s are Acrobat but just very different shades of it”.

Indeed the recording of Flux saw the band take a more organic, stripped down approach to writing, with producer Rob Kirwan facilitating the band’s growth together as songwriters. “One of Rob’s big contributions to the E.P. was to get everyone in the room, get a vibe going, have the band play the song until it fits with everybody then hit record” recalls Healy.

“Also it was about finding something that could be recreated live” comments bass player Naoise Morzadec. “There’s no point in having sixteen guitar parts if they don’t fit or can’t be performed as a band”.

With Acrobat taking an organic recording process for the E.P. the group were searching for songs that would feel and sound good in any live context. “Although the stages have gotten bigger, especially at the Meeting House square during Hard Working Class Heroes, and we wanted to have tracks that fit that sort of setting, we also wanted to be able to strip the songs back acoustically too” Healy comments.

“Actually during pre-production Rob would sometimes sit us down after playing a track and ask us to try it acoustically” Healy continues. “Often when you take a song down to just acoustic guitar and vocals that’s when you find out what works and what doesn’t”.

Although the origins of Flux is steeped in this straight-up live approach, the end result has big broad sound. “That comes down to picking the right parts I think” insists Morzadec. “That’s one of the things about working with Rob, everyone is playing what they would be live, it’s just finding the part that makes it sound fuller”.

With addition of new members and a new style of working together Flux could be considered to be a new beginning for the Dublin act. “I think the difference with the last E.P. is that we put it out with really thinking about how we would do it live” Healy comments. “We didn’t have the band we have now and there was too much in it, with this record we wanted something more natural. Are we starting again? Yes. But I think whenever you release a new E.P. or album you’re kind of starting all over again anyway”.

Click below to ‘Not Back Down’ taken from Acrobat’s new E.P. Flux. The record itself is due for release this Friday (October 31st).