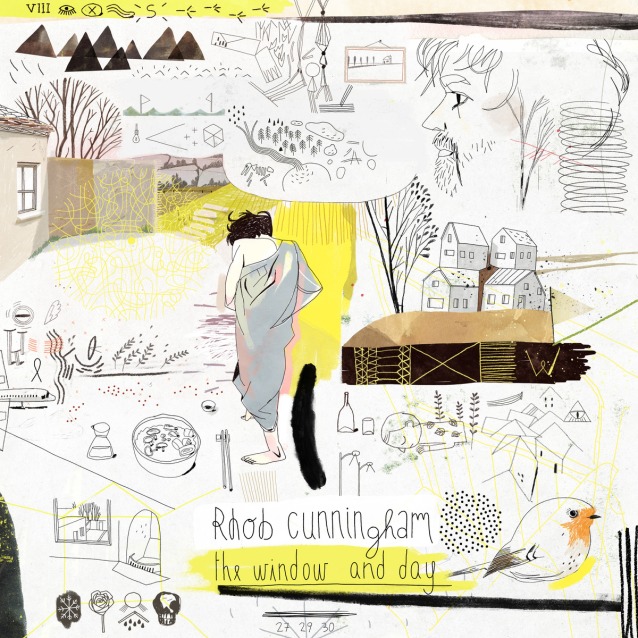 Weaving strings, deep-bodied acoustic guitar and deftly performed vocals form the backdrop to this organically conceived album. With songs such as ‘Ghosts (the Curtain)’ the central mood of the record is established, the Window & Day is a descriptive lyrically nuanced piece.

For an album as gently performed and open-hearted each song flows quickly and succinctly into the next. Meandering through the short-sharp jazz-folk of ‘Key I See’ to the joyous tones of ‘Someone Will’, the Window & Day moves briskly from moment to moment.

Feeling like a story of experiences and captured memory the centre-piece of the L.P is the simply gorgeous ‘Ever Since’. Underscored by distant texture and brimming with vivid melody the track finds Rhob Cunningham at his lyrical best, and the band at theirs.

And that’s where The Window & Day excels as a cohesive album. The interplay between Cunningham and his accompanying musicians feels crafted and creative, with neither getting in the others way.

The Window & Day is an album of specific place and time, stories and moments all captured by Rhob Cunningham’s expressionistic lyrical flourishes. While the record is by no means a drastic re-invention of the alternative-folk genre, this never seems to be the concern or concept behind it. Instead the music works as a washing tapestry of harmony, melody and deep repose that allows Cunningham’s words the room to roam, resulting in the L.P. feeling personal and engaging.

The Window & Day by Rhob Cunningham is out from September 18th