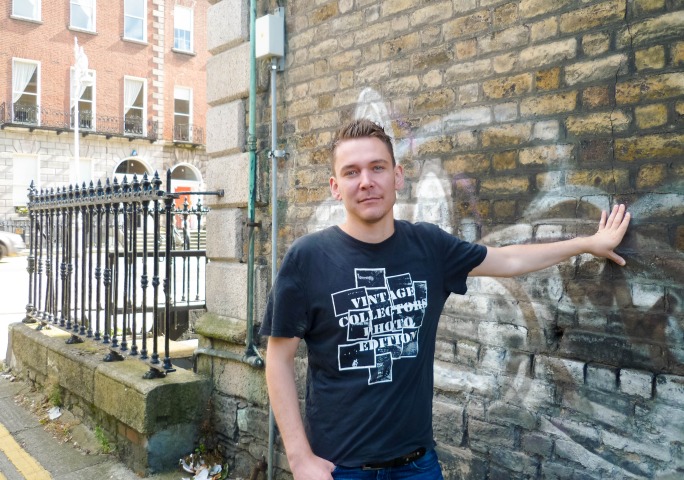 Norwegian songwriter Simeon Kirkegaard is set to perform at the Workman’s Club in Dublin with his band the Existentialists on October 11th as part of his upcoming Irish tour. Simeon talked to the Last Mixed Tape recently about his songwriting process and upcoming single ‘Sodium Swimming’.

You released your debut album ‘Shoulders Down’ in 2013, what can you tell me about the writing and recording of the album?

Well I’d been wanting to release a solo album for many years when ‘Shoulders Down’ came out. The writing process had gone over many years with songs sporadically being finished and piling up. At one stage I figured “You know, I’ll just write a song a day and I’ll see what happens.” and that worked out pretty well I have to say, several of the songs on the album was written like that. I’d come home from college in the evening, grab some food and then go to my room to write a song. I even demoed them the same night too using my guitar and a small 4 track recorder. I still prefer that way of working actually, but sometimes it just takes a little longer for the songs to find themselves. I believe Paul McCartney is doing his writing in a similar way, trying to have a song finished in a few hours.

The recording itself took place in my studio in Norway, near my home town of Akkerhaugen. Akkerhaugen is a brilliant place to go to record and work on music. You’d never believe how many musicians that are from this small place, it’s a population of about 500 and it feels like 400 of them are musicians. I remember back in the day when I used to rehearse with one of my bands we shared rehearsal space with black metal band ‘Emperor’ if you know them. This was before they made a break through on the metal scene, I remember listening to some of their rehearsal space recordings thinking, ” Shit this is pretty dark stuff”. I wouldn’t be into black metal I have to say, it’s just not for me you know. Although my lighter pop rock stuff wouldn’t exactly rock their world either I’d say.

I started recording the album in the summer of 2012 and by the end of the summer it was pretty much finished. I did nearly everything myself, drums, bass, guitar vocals, producing, engineering and so on, so it was a tough process. I’ve done a lot of producing and engineering for other bands before, but it’s much harder to keep the motivation going when you’re on your own you know. No one to bounce ideas off or to ask to press the record button. That was a nightmare sometimes, running between the rooms pressing stop, delete, record every time I made a screw up, but I got there in the end. At the time I was a bit sick of excuses for not making an album, like “Oh we need a state of the art recording studio to do this album” kind of attitude you know. So I just used what I had and that would make do. I actually used my little brother’s epiphone les paul guitar on the whole album, so all the electric guitars you hear are an epiphone les paul, same goes for the bass, acoustic guitar, drums – they’re all the same individual instrument throughout. It was quite a fun way to do it actually because of the very clear limits, «So what guitar will I use on this song? Well I suppose I’m gonna have to use the only one I have» but you know, limits like that can be great, keeps you focused on what matters which is the music and not which guitar you’re using to play the music. It’s also a bit like a deadline you know, with no deadline you’d never get it finished.

Since the album’s release have the song’s changed as you brought them into the live realm? How has the group’s (the Existentialists) sound changed?

The sound has changed quite a bit I think, just getting the band in changed the attitude of the sound massively. They’re still the same songs most of them although they’re a bit more edgy now, but some of the songs have been more or less completely reworked, so I’m hoping to record these in their new shape at some stage. The Existentialists consists of friends from Norway so to give them an introduction they are: Jan Birger Akerhaugen on guitar, Fredrick Kaasa on bass and the human metronome Joern Gunnar Eilevstjonn on drums. They’re all amazing musicians and people and I really appreciate having them on stage with me. Just imagine the nightmare of being alone on stage, with a guitar and a loopstation?! Who would you talk to backstage after the gig? Record yourself on the loopstation maybe, so you could have a pretend conversation at your amazing after show party or something? That’s sad. Nah bottom line, live band all the way for me.

With ‘Shoulders Down’ behind you, your next single ‘Sodium Swimming’ out this month. Have you change as a songwriter between your debut & this release?

Yeah ‘Sodium Swimming’ is out on the 21st so excited about that. It’s being released in two versions actually, one full on version and the other a very gentle acoustic version. The idea was that it would work on both a friday night as well as a sunday morning. I think it shows two different sides of the same song and different qualities about it which is always difficult to communicate through just one version.

I think I’ve changed or evolved rather as a songwriter. Like with ’Sodium Swimming’ that’s actually a joint effort between me and my good friend Feileacán McCormick, very Irish name, but I actually met him in Norway while studying architecture in Bergen. We’ve been writing a few new songs together and it really works very well I have to say, while before I’d write the music first and then get the lyrics down, now Feileacán often comes along with some lyrics and I’ll try to put it into music which is a new thing for me. I like it though, because often I find myself pushing myself in a different way to try to come up with a melody that can work with sometimes a very odd lyric or something and it just generates more surprises I think. Sometimes I’ll have suggested some lyrics and he’ll come along and add some lines or propose something and more often than not it works which is great.

How do you approach your band the Existentialists with your songs? Do you work on them together from the beginning or do you write the completed piece before hand?

It really depends on the song. Sometimes I’ve a very clear idea of what the song should sound like while other times they come along and just surprise me. Most of the time though I’ll have the basic song and lyrics finished and then they might add some magic dust or come up with a new section to add to the song. When it comes to the songs from ‘Shoulders Down’ that were reworked, this tends to be the ones I found were lacking something on the record, but with these guys they’ve found a new life which is great. It makes it really fun to play them live as well because they’re different than from the record.

With an Irish tour this Autumn, will you be trying out new material with the band?

We most certainly will! We’ve actually played new material for half a year now and a lot of it will be released in the future, but I also just find that the new stuff adds something to the set you know. The next single after ‘Sodium Swimming’ is a track called ‘Ocean Life Living’ and I can’t wait to release that. It’s probably the track I’m the most proud of from a songwriter’s point of view.

We’re doing four gigs on our Irish tour this year, Dundalk, Galway, Dublin and Cork between the 9th and 13th of October. In Cork we’re playing at the Crane Lane theatre and it will probably be the longest gig, so you’ll probably hear a few covers too in addition to our own set. But whatever cover you hear it’ll probably from either the 60s or the 90s. Nah that just a joke, you see lots of people seem to think the music is sort of a crossing between 60s and 90s music, but what can I say, they were both great eras in music.

Simeon Kirkegaard will play the Workman’s Club on October 11th, tickets are priced at €6 for more information visit theworkmansclub.com.