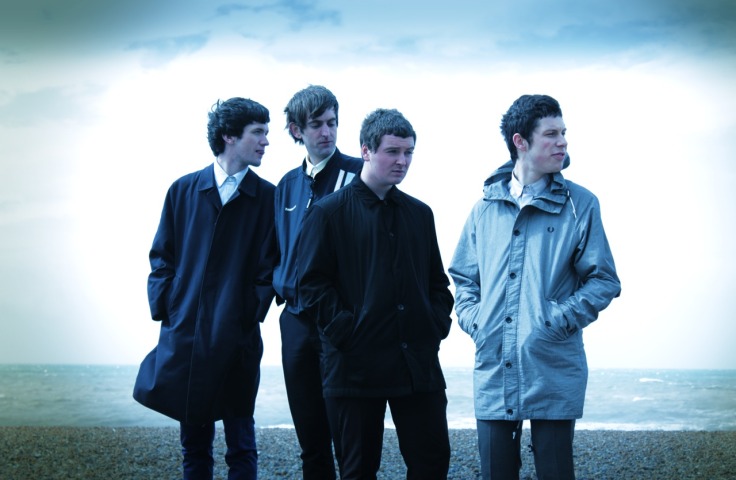 Standing at the back of Sweeney’s bar on a hot summer’s evening in Dublin I awaited my interview with one of the city’s most feted indie acts Gangs as they sound-checked for an upcoming appearance at Retro Revival. And from what must have be a routine process for the band, it is immediately clear that the sheer force of their bone-rattling sound is something very special indeed.

“It was about capturing the live feel. We had the songs ready before we went in and just wanted to lash them out” insists Gangs front-man Jordan Curtis (now sitting in the quieter surrounds of a small restaurant on Bloom’s Lane) speaking about the group’s week-long stint recording their début E.P in Bow Lane Studios.

Recently signed to independent music label Reekus Records the group worked with Irish music legend and Blades bassist Brian Foley as producer. “He has the same taste in music as us. He’s into bands like the Jam and the Clash” comments guitarist Dan Smith. “Also he’s a musician and would bounce ideas off us that he knew would work. It was good because we really respect him for what he’s done and we hit it off immediately”.

“Being in the same room helped as well.” Smith continues. “Being able to see each other meant we felt every bit of it and that’s part of the sound of the record too”.

A group with a raucous live reputation that has propelled their image forward, it is clear that the Dublin band wanted to maintain that energy in the studio. “We literally just plugged in and went for it. One of the songs that ends up on the E.P is a first take.” recalls James Connolly “So what’s on this record is who we are live”.

Indeed Gangs understand the power of their succinct, straight to the point sound with drummer Jonny Halpin stating that “We aren’t one of those bands who over produce their records. There shouldn’t be a boundary between what we do in the studio and what we do live”.

Since first bursting onto the Dublin music scene in 2012 Gangs have gathered an almost moveable scene like following and momentum that has carried the group to appearances at Other Voices and garnered them considerable attention on a national scale appearing in Hot Press on several occasions, all of which without a full-length album or E.P.

When asked about this momentum and expectation, Curtis exudes the band’s palpable confidence. “We had no time to think it about it really. We were told “you’re recording your E.P next week” and we were ready for it. Everything moved so quickly that it’s only now that we have time to reflect on it. But that’s the way we like things and I think that comes across in the record”.

A group born out of the malaise and dissatisfaction of the times, Gangs have maintained a clear connection to the following their distinct sound has amassed. Indeed at the band’s recent ‘2 15’ single launch (reviewed here) the packed audience sang and cheered to songs that have yet to be recorded, such is the strong connection between the group and their fans.

“We’re all on the same page. It’s not a case of “we’re up here and you’re down there”. It’s personal, a lot of that crowd started out with us as well” claims Jordan. “When people come to see us they want to have a great time and we want to have a great time too, so it reflects on us both. The thing we’ve always tried to get across in our shows is that the crowd are just as important as us, we feed into each other”.

Dan Smith sums up the whole ethos and attitude that has made Gangs one of the countries most important bands at moment, “One of the main things about the E.P is that we made it for everybody, but in particular young people. Lyrically and musically it’s based around our lives, young people’s lives. That’s something we want to get involved in, some band’s totally forget about them and there’s nothing for the younger crowds to do. So when we launch the E.P we’re playing an under-age show during the daytime as well as an over-age show that night. We want everyone to be involved. Younger crowds are just as passionate and involved in our music as anyone”.

Gangs will play the Mercantile, Dublin this Saturday as part of YouBloom 2014. For more information click here.