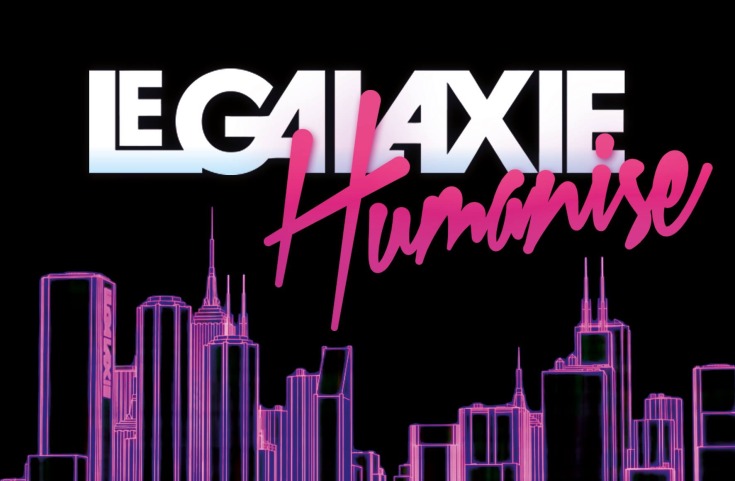 In this edition of our song of the week feature The Mixed-Tape the spotlight turns to the Le Galaxie’s new single ‘Humanise’.

A sprawling sonic soundscape permeates throughout the vast expanse of Le Galaxie’s current single. Delivered with the group’s highly stylised production ‘Humanise’ pulses with a deep back beat that anchors the track, allowing the lush synth textures open the song’s vibrant spectrum.

Infectiously evolving with hook-laden grooving rhythms the constantly moving melodic parts that form ‘Humanise’ shimmering within the palpable pounding feel of the single. Glistening with interwoven arpeggiated pops and clicks echo into the background as Le Galaxie construct a flourescent atmosphere around their music.

Pushing and pulling the listener’s attention, ‘Humanise’ reveals hidden textures, harmonies and beats with each play. While the sheer depth of weight given to the songs low-end rattle and hums its way throughout the song, giving a percussive bedrock for the recording to rest upon.

Above this Le Galaxie position the deep-seated vocal delivery that switch timbre and shape adding to the single’s expansive sonic boundaries.

Joyously frantic in its overall aesthetic, ‘Humanise’ persistently swaps one melodic hook for another. Opening and then suddenly closing it’s scope through sonic twists in its tail Le Galaxies latest release is as unique and singular as the group themselves.

It is for these reasons that ‘Humanise’ by Le Galaxie is this week’s addition to The Mixed-Tape. The single itself is out now. To read the previous additions to the feature click here.