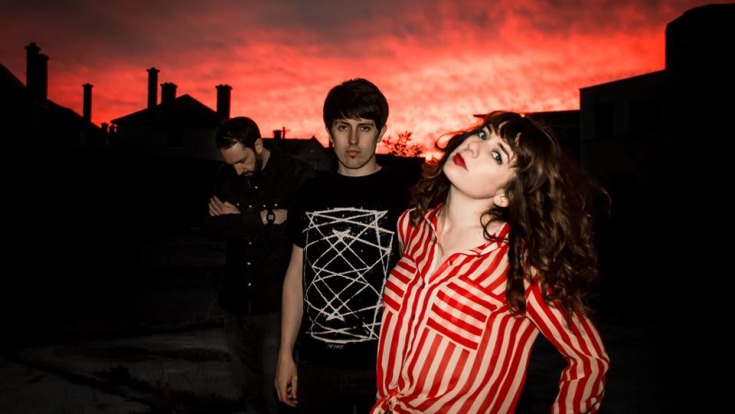 Synth-pop trio Sleep Thieves are the latest act to be filmed live at Unit-1 studios in Dublin, with the group performing the brilliant ‘City of Hearts’.

From the very outset of the performance, the absolute textural vastness of Sleep Thieves’ deeply atmospheric sound is caught within the crunching, echoing weight of percussion and pulsing synthesizers.

The evocative lyrical turns of phrase and hazy incandescence of the trio’s sound meld together underneath Sorcha Brennan’s emotive performance that captures the imagination with each falsetto rise and hushed word.

Building, harmonically weaving elements push the performance sonically to a beautiful, melodically enchanting crescendo. While the gradually opening aesthetic of the recording glistens with sounds that meld themselves within the song’s deep, beguiling ambience.

Captured in Laura Sheeran’s patient camera work, the faded radiance and dark shadowed corners of Unit-1 form a visual centre around Sleep Thieves performance. Mirroring the glowing elegant flicker of their sound, the stark imagery and glaring focus of the video fuses itself to ‘City of Hearts’.

One’s of the country’s most sonically engrossing acts, Sleep Thieves capture the isolated mood and atmospheric nature of their studio work with relative ease. Providing what is possibly the most enchanting addition to the Unit-1 series, the trio’s performance is an exciting indication of their new album You Want The Night, which is due out next month.

Click above to watch Sleep Thieves perform ‘City of Hearts’ live in Unit-1 studios, Dublin. The video itself was filmed by Laura Sheeran and recorded by Marc Aubele.