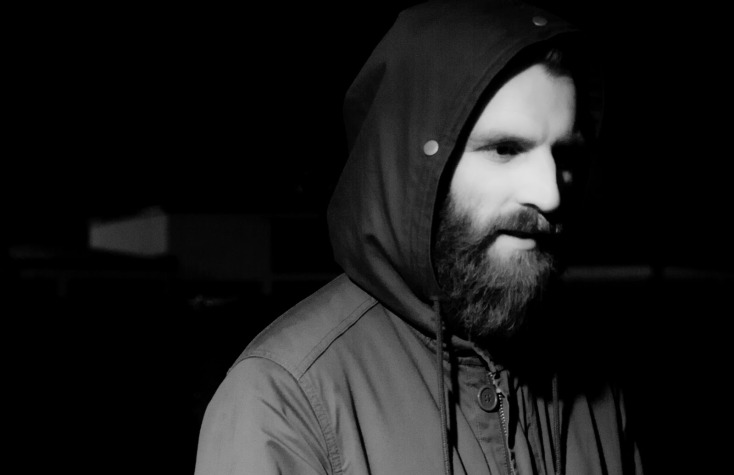 Electronic composer Ben Frost brought his Aurora tour to the Button Factory in Dublin last night providing a show that attacked the senses and captured the imagination.

With the crowd held in a tense, hushed silence as Frost took to the stage cast in shadow by the warm glow of the venue’s stage lighting the anticipation of what was to follow from the deeply singular musician was palpable.

Beginning his performance, flanked by live percussionists Greg Fox & Shahzad Ismaily, with the ominous ethereal ambience that permeates from his latest work, Aurora, flashes of bright white-light burst forth from the stage with each sudden textural blast of distorted harmonics and percussion illuminating the audience in strobing, flickering radiance setting the scene and the tone of Frost’s all out sonically and visually arresting show.

Populated by a great heavy ambience that weighed down on the listener not just in terms of sound but also physically, Ben Frost’s performance aesthetic seems to slowly insist itself upon you. As the sheer sudden all-encompassing scope of the show dominates the senses from the very outset the overall effect gradually becomes hypnotic with the large blast of noise and rhythm melding into one multifaceted experience over time. Indeed the performance could not be taken in the same context of more contemporary ‘gigs’ and rather as an experience in and of itself that works to slowly subdue the crowd with great bold sonic flourishes.

The large body of sound that resonated within the wall of the Button Factory weaved itself around the visually striking lighting and overarching aesthetic of Ben Frost’s performance, stunning syncopated rhythms and harsh vivid burst of harmonics blended into the cohesive atmosphere created by the music’s sonic bedrock. Entranced by repetitive, slowly evolving elements that popped and clicked around the boundaries of his music, the depth of field and isolated tone of Frost’s latest work flickers constantly with brilliance.

However, the real effect and success of the performance comes from the mental and physical result of the experience itself. Left with the gentle hiss of ringing in my ears following the rumbling, howling sound of the show the serene meditative feeling that came after was deeply affecting. And in this context, Ben Frost’s individualistic approach to both his music and live shows results in a simply stunning experience imbued with harsh, tense beauty and dramatic glaring ambience that will stay with you long after you leave the venue.

Aurora by Ben Frost is due out on May 26th.