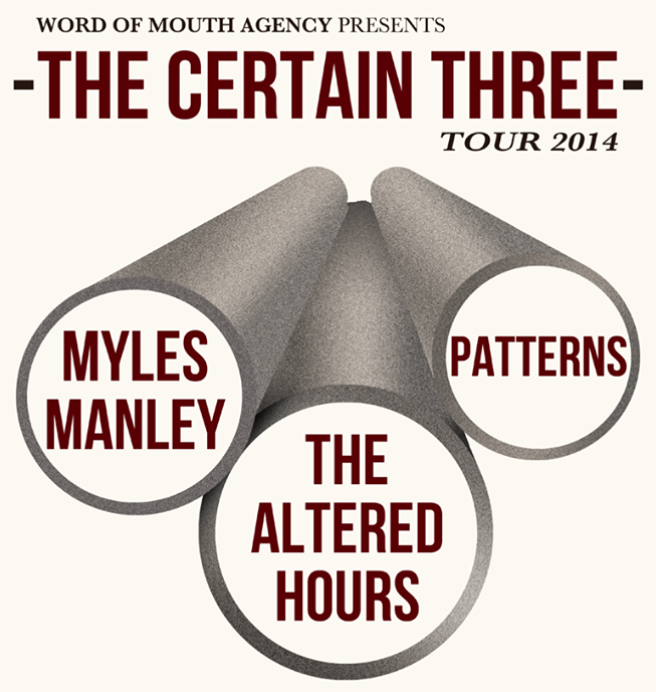 The Word of Mouth Agency’s Certain Three Tour 2014 had its opening night at the Workman’s Club in Dublin with Patterns, the Altered Hours and Myles Manley all performing.

Manchester alternative-rock act Patterns opened the show bringing their sonically expansive sound to the Dublin venue. Playing to a backdrop of moving, saturated visuals the group’s affective blend of textural synth, powerful guitar and syncopated rhythms transitioned from the band’s studio work to the live realm with tracks such as ‘Induction’ being expanded upon and given an added dimension through Patterns cohesive interplay.

Following Patterns, and indeed stealing the show overall, were the Altered Hours. Almost immediately the intense visceral aesthetic of the band’s screeching noise infused sound came clearly into focus with tracks such as ‘Smoke Your Eyes’ and ‘Fuck the Police’ showcasing the all-encompassing feel and tone of the group’s live performance. Caught in the hard glow of the Workman Club’s stage lighting the Altered Hours cut imposing figures with a frantic rendition of their new single ‘Dig Early’ providing the highlight in a set filled with moments of brilliance.

Indie-pop artist Myles Manley closed the show with a set that showcased the musician’s deeply diverse sound, melding rock and roll, pop and alternative-rock elements in a way that felt effortless and individualistic. Subversive, emotive and entertaining all in one performance Manley added an eclectic feel to the Certain Three tour highlighting the broad spectrum of styles and approaches involved.

The Certain Three tour provided a depth of talent and originality with its stellar line-up of artists with all three acts capturing the imagination in equal parts, although Cork band the Altered Hours stole the show most effectively.