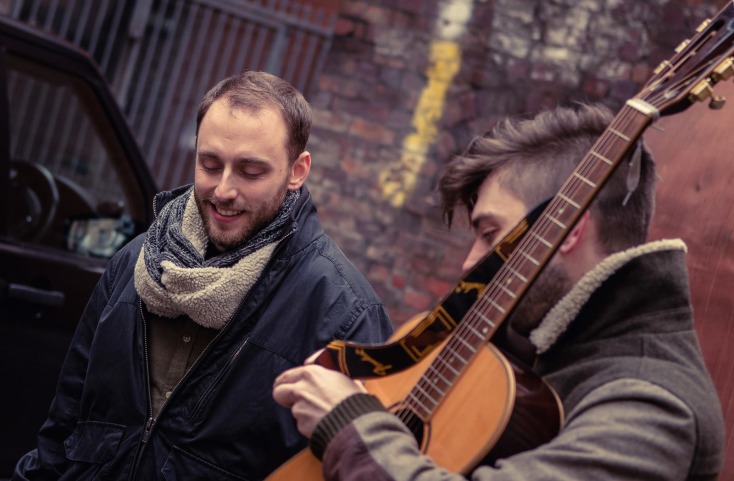 Alternative-rock duo Eulogys will launch theIr third E.P Hush on Friday, April 11th with a gig at Anseo in Dublin. Band members Kenny Hyland and Peter Bourke spoke to theLastMixedTape.com recently about the group’s latest record and evolving sound.

You release your third E.P ‘Hush’ this week. How has the group’s sound evolved since Kingfisher & the Hummingbird?

Quite a bit! It’s only since we started recording the tracks for ‘Hush’ that we really felt we hit upon our sound. Not that that sound is easy to describe, but the phrase we’ve thrown around the studio a lot is ‘empty but full, delicate but huge’. Whether or not we’ve achieved that will be down to the listeners. Of course, the most obvious change is that we’ve begun to use electronic beats exclusively. This was a very deliberate move on our part in trying to capture the kind of sound we wanted.

‘World Send’ was the first single taken from the record. How much of a glimpse does the track give of the E.P’s overall sound?

It pretty much embodies what we were going for, that sort of minimal sound that somehow manages to not have any gaps. So it gives a pretty good indication of what the rest of EP is like. Or at least that’s what it’s trying to be like!

What was it about ‘World Send’ that made you decide on it being the lead single?

The reaction we got from people when they heard it. Even when we first started playing it, we were doing a lot of acoustic gigs so it was a very stripped back version, but still people would come up to us afterwards and hum the chorus and ask what that song was. We took that to be a good sign so we went with it. Also, we felt that it was the song which best showed the kind of sound we wanted to achieve.

As the Eulogy’s progress with each E.P how has the band evolved in terms of writing together and working in the studio?

Our writing process is still the same, one of us comes with a song or an idea for a song and then we work on it to make it sound more “like us”. We just play around with different instrumentation and arrangements over a basic drum-track until we hit upon what we like. Then we create the beat and play it as much as possible. We don’t tend to start recording until we have the song fully written. We find that keeping the writing and recording processes separate works best for us, because by the time we get to the studio we both know the songs so well that it takes a lot of the guess-work out of the recording. There usually aren’t too many changes to be made. So then we can spend most of our time focusing on getting everything recorded as well as we can.

Do you feel ‘Hush’ is a strong indication of how the Eulogy’s will continue to progress their sound?

Yes, definitely. As we said, this is the kind of sound we like and want, so from here it’s a case of developing and refining it further in future tracks.

Following the E.P’s release what do the Eulogy’s have planned?

All going well, we plan to release another single from this EP along with a video. Apart from that the plan is to gig as much as we can to promote ‘Hush’ and get more people listening. That’s really what it’s all about for us. If people are listening, we’re happy!

Eulogys will play Anseo this Friday, April 11th with support from Squareyes. Tickets available from eventbrite.ie.