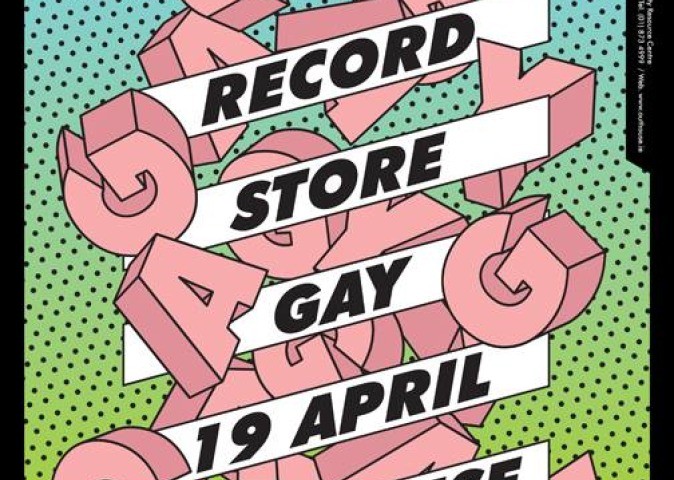 Annual music event Record Store Gay will move into its third year next month, Saturday April 19th. With an eclectic collection of covers from some of Ireland’s most exciting indie acts and including live performances on the day Record Store Gay 2014 promises to be a must for Irish-indie fans. Event organisers Áine Beamish and Andy Walsh spoke to theLastMixedTape’s Stephen White about the idea behind Record Store Gay.

How did the concept for Record Store Gay come about?

Ándy: Myself and Áine were talking about doing a gig in the basement theatre space of the Outhouse about 2 years ago. It was around the same time as Record Store Day was happening and we thought about having our own kind of “pop-up shop” with bands playing on the day. From there we decided to do something different and have the bands record some gay anthems as well for charity and make it fun.

Record Store Day that year had a list, and I’m not sure if it was alphabetical or not, but it was all bands like Abba and David Bowie doing reissues. We thought let’s do those types of tracks but different and more fun!

Áine: I’m based here (Outhouse) full-time and we put on a lot of community events and the idea of a music festival was great. Having Andy programming the acts, as well as having all the bands playing throughout the building was brilliant.

The first year was an experiment really, to see how we would work it and how the bands could use the space we have here. We have the downstairs area which is really a little venue, we had a full set up down there and we have the cafe for acoustic sessions.

Andy: It really was an experiment because with everything that goes on for Record Store Day we thought maybe no one would show up.

Áine: Especially with all the music in the bars as well, because people might want a drink when they’re watching the bands play. We wanted to pull that back a bit because this is a community centre and we had families, and kids and teenagers all coming in on the day. It made it really fun for everyone.

Do you think the day gave young people a chance to see bands that they may not have experienced live before?

Áine: Yeah, we have a bit of a youth scene her with the group from Belong To coming every Sunday and they came up. As well people with kids who maybe don’t have the time to go out to see these bands any more liked it too and it made it all a lot more accessible. It attracted such a great, diverse crowd. We had young LGBT people coming in as well as all different ages and walks of life. A real great mix of people, which is great for the centre as well.

Andy: We had such a brilliant set of bands playing too and a lot of people found their new favorite bands from coming to the shows on the day and thinking “what the hell is this, this is amazing” there was so much of that which was great.

How did you approach the acts that got involved?

Andy: I play around in bands myself so the first year I just asked a load of musicians I know would they do it. We got a fairly good reaction from them. We only really started it in February of that year so we didn’t have much time to organize it.

But last year we had a lot more time and planning, it was a mix of us asking bands and some coming to us. This time around the reaction has been great. We’ve had so many people who heard last year’s songs ask to be a part of it.

Áine: And because last year was so successful and the whole thing is quite a niche idea, it’s very independent which is important, we also got a lot of press for it and we caught people’s eye a bit more which helped with the bands asking to be part of it this year.

How important is it to maintain that independence year to year?

Andy: It’s very important, especially since RSD itself has become such a huge money spinner for record companies themselves, who are just releasing reissues. The idea of it being about small record labels and shops has slowly went away. We were just giving away CDs and melody pops for donations towards the charity on the day.

Áine: Anyone who came in on the day could give a donation to Outhouse and that was so important to the centre as well. It all came from people’s goodwill really. We are a LGBT charity and we had 30,000 people come through the doors last year for advise, information and the other services. Those donations helped us improve the facilities, the website and keep’s the lights on.

How do you curate the songs that appear on the record?

Andy: A lot people ask “what is a gay anthem?” and some people would come up with a song that isn’t really a gay anthem and is more of a…

Andy: Yeah, and wouldn’t have any bearing on what we’re looking for. So you have to say “what about this instead?” and then talk about it a bit more. But most of the bands get what we want, it doesn’t all have to be Gloria Gaynor (laughs)

Áine: Addy from French Bird did this great grungy cover of the Hole song ‘Miss World’. And it was so much fun and that was his gay anthem. So it doesn’t always have to be Kylie or Madonna. It’s down to people’s own interpretation really.

Is there a particular song that hasn’t been covered that you’d like to hear?

Áine: My head blew off so many times last year because all the choices were so good!

Andy: I’d really like to hear ‘En Vogue’. I actually thought there would be loads more Madonna, but we’ve only had the one Madonna song so far which is amazing.

Áine: Which I kind of like. I like the more surprising songs that you wouldn’t think of until someone does it

Andy: Definitely, Castcars did an Amanda Lear song called ‘Follow Me’ last year. It was absolutely amazing and it’s actually brought me to listen to more of her stuff since.

This year I’ve seen a lot of activity and interaction from bands who are participating such as Cave Ghosts and Sleep Thieves uploading pictures of themselves in the studio recording their songs. How does it feel to see this much positive interaction with the event?

Áine: It’s incredible, there’s so much goodwill from everyone involved.

Andy: And the fact that everyone’s doing it for free as well. It’s incredible that all these bands are basically giving us something so amazing for free.