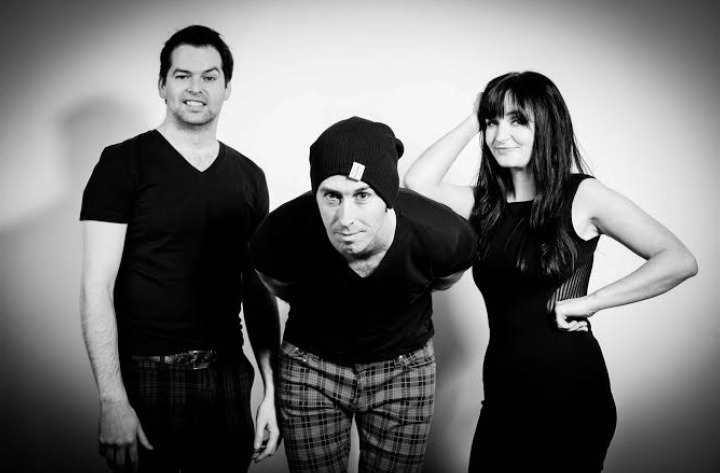 Dublin electronic trio Alibi Trax will play the Button Factory this Saturday March 15th as part of a line-up that includes Vann Music, Otherkin and Children of the Son. The group will also be launching their new E.P Act One at the show. Bill, Alan and Rosie spoke to theLastMixedTape recently about their sound, song writing and formation.

You recently added Rosie as a new member of Alibi Trax how did this come about?

Bill: When we started to consider a new member of the band we instantly thought of getting in Rosie, she had worked with us before on some of the arrangements, and appeared in the video for ‘Be With Me’. It just seemed like a natural move for us.

Alan: We never considered anybody else, and it just seemed like the next page in the book for us. We didn’t need to think about it because Rosie had been with the group since it was born, and we know each other years too.

Rosie, how was the experience of joining  group for you?

Rosie: It felt natural but it was also kind of nerve wrecking. Although I’ve been playing music for years, I’ve never actually been in a band before, so I’m very excited about that and working with the guys.

In terms of song writing has the dynamic changed now that there are three different influences working together on it?

Bill: We all came from a metal background and myself and Alan had been working together for years. Our first songs had this industrial edge to them and we sort of fell into that scene for a while. But lately we started to write away from that.

Alan: We had the single ‘Be With Me’ for a while. What we usually do is Bill will work on the basis of the song then I’ll come in with a scatter of lyrics and arrange them around it. But I had very specific set of lyrics for that song in particular.

It was a much softer song than what we were playing at the time, and the crowd we were playing for were looking for a harder sound from us, so it went on the back burner. Over time it transpired into more of an electronic love song and with Rosie now on board, we had the final piece of the puzzle in terms of sound.

And when you began to move away from that metal/industrial sound did you find that the scope of your song writing was more open?

Bill: Totally. When you move out of your comfort zone it can be scary and you wonder if anyone will even follow you over. But I’ve found myself writing in a completely different way these days and that’s very exciting.

Rosie: I think we are far more honest in terms of sound and song writing now. I think the sound we are making is truly who we are, not just as musicians but as people too. It’s really who we are as a band.

Alan: I agree, it’s honest to who we are. I don’t think the industrial sound was ever really us, we never aimed ourselves towards that sound it just happened.

I remember being at a gig in the Pint and a guy asked me “What do you class yourselves as?”, I said I wasn’t sure and asked what he thought and he said “EDM” which I hadn’t even heard of before. We were really just writing what we wanted, now we can write a love song, heavy song, whatever and if people like that “great” and if not, then that’s ok too.

How has the live performance changed now that Alibi Trax is a trio?

Bill: We are rehearsing at the moment and it’s really starting to show. The whole dynamic has changed for us now. Before it was just me and Alan as a duo but with Rosie we can start to build the sound more during live shows as well.

Alan: One of my favorite bands of all time is Depeche Mode and I was reading recently how Dave Gahan felt that during the live shows the spotlight was very much on him adding to the pressure of it. We didn’t mean to end up that way but because I am the singer it came about naturally. But then during a festival we set up facing each other instead of the usual way, towards the ground and that was it. We had a much better experience and could communicate much better, it gave us some our best reviews to date and now with three of us sharing a stage now when can add to that vibe and really communicate, not just with ourselves but with the crowd as well.

Tickets for Vann Music, Otherkin, Children of the Sun and Alibi Trax at the Button Factory on Saturday March 15th are priced at €10 and are on sale now. For more information visit Tickets.ie.