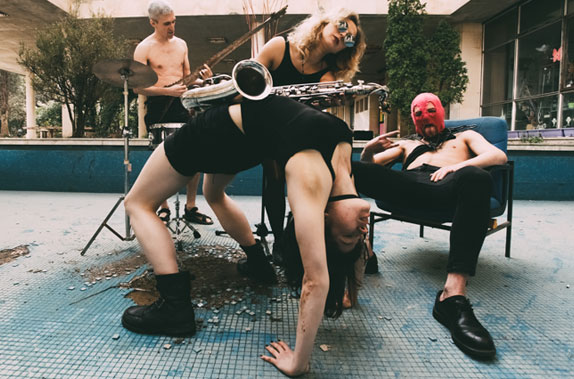 Protest punk-rock band Pussy Riot are set to bring their RIOT DAYS show to Dublin and Belfast this November.

RIOT DAYS (“Revolution”) will see Maria Alyokhina, Kyril Masheka – her main stage partner on “Burning Doors“, Nastya (one of the leaders of Pussy Riot of 2011-2012) and Max of the music duo AWOTT (Asian Women On The Telephone), and Olga (another Pussy Riot member), perform throughout the UK & Ireland. The project is produced by Alexander Cheparukhin and directed by Yury Muravitsky – one of the leading Russian theatre directors, winner of the “Golden Mask” annual Russian theatre award.

It’s all based on Alyokhina’s new book, also called Riot Days, that revisits the events leading up to her incarceration. Together with a host of collaborators, she’s transformed the book into this unique piece of performance art for fractious times – exploring resistance and protest around the world.

Tickets for Pussy Riot’s RIOT DAYS are priced €20/£19 go on sale this Friday 21st July at 9am through www.ticketmaster.ie & usual outlets nationwide.