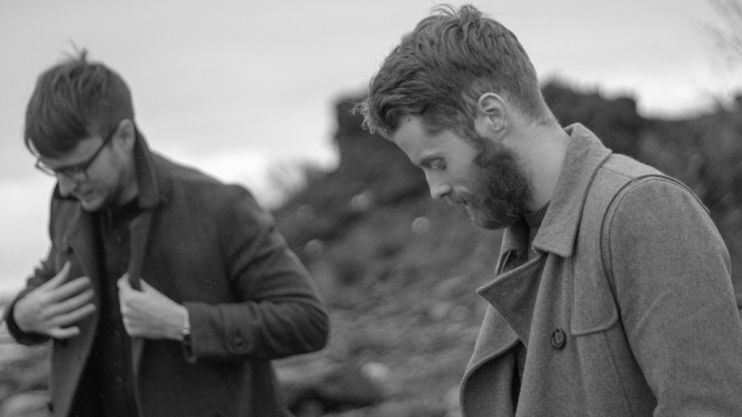 Solo artists Ciaran Lavery & Ryan Vail are currently collaborating on new album entitled ‘Sea Legs’, which is due for release on April 17th. The pair will perform together at Smock Alley theatre in Dublin this Thursday night. Both Ryan and Ciaran recently spoke to TLMT about the project.

How did the the collaboration first begin?

CL – I had the idea kicking around in my head for quite a while but to be honest I didn’t think it would ever amount to anything. I was listening to lots of Ryan’s music one night around 1am; it was a eureka moment. Luckily we ended up being booked on the same bill at a festival about a month later & things kind of escalated from there

RV – Started off with a conversation on Twitter. Then after sharing the stage at a music showcase in the Black Box in Belfast we decided to put time aside to work together.

What was it about each others music that made you want to work together?

CL – Ryan has an outrageous ability to direct a lot of emotion in his songs without ever being obvious. It draws you in. That & the fact that he is ridiculously talented & tasteful at what he does.

RV – Ciarans voice live totally blew me away. Very confident and just shaping words so well. After hearing him live I had to work with him.

How did collaborating together shape the overall sound of Sea Legs?

CL – Personally I think the amount of open-mindedness that we approached the project with was one of the main factors in how Sea Legs came to be. There was no conscious effort at the beginning to create what we did; we were just both in agreement of working against the grain of what may be expected out of the collaboration. It was an exciting process – never stressful which was a bonus

RV – Ciaran began writing songs at the start ,bouncing ideas via the Internet. We noticed there was a nautical theme in the lyrics. So I decided to start collecting sounds by the Sea with my sound recorder. Merging both song and sound to achieve a texture to the music.

Did the process open your own minds to a different way of working?

CL – If anything it made me feel very positive about collaborating. I’m not one to be precious about songs that I write & Ryan helped to breathe life into some songs that I had scratched my head over for quite a while. It’s nice that people have embraced something so different from the norm

RV – Very much so. I never gave to much thought to structure in my own music. Now it’s very important to me.

For you how does Sea Legs fit with your solo work?

CL – Sea Legs is a side step from where my solo recordings are, a nice breather from what I’m used to.

RV – Yeah it’s not to far from were im at musically. I think people that follow us are generally open minded music lovers. So this will be a nice addition to there collection.

What would you like people to take away from listening to the record?

CL – I guess if people enjoy the tracks & find something personal for themselves in it then that’s more than I could ever ask for.

RV – I would love this record to inspire younger musicians to branch out and try new things.

Will you work together again on more projects?

CL – I think the future looks very interesting; I guess we can see what happens down the road.

RV – Of course. Sealegs is not a one off. The response it’s got means we need to work together again. Might not be right away, but in the near future.

Tickets to Ryan Vail & Ciaran Lavery (Sea Legs) at Smock Alley on Thursday, April 16th are priced at €14/€17.50 and are available online here. Doors are at 8pm, support on the night comes from Liza Flume.