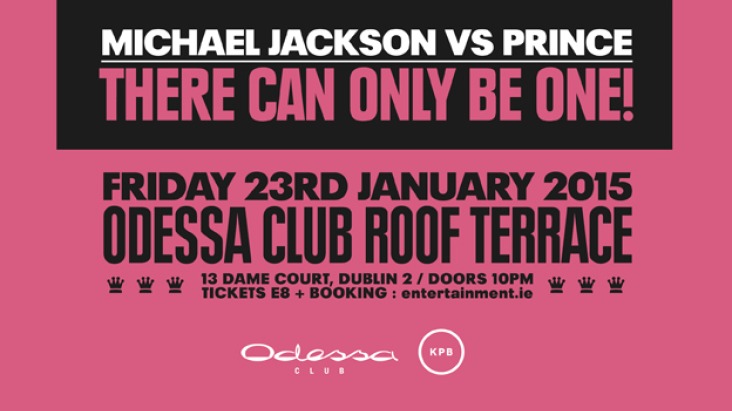 The Odessa Club in Dublin will be kicking off it’s 2015 with an exciting DJ event entitled Michael Jackson VS Prince: There Can Only Be One.

Two artists who dominated the late 70’s/ 80’s & 90’s pop scene and constantly battled it out for the top spot, Prince and Michael Jackson both released several era defining albums (Off The Wall, Thriller, Sign O’ The Times) and singles (‘Billie Jean’, ‘The Way You Make You Feel’, ‘Purple Rain’, ‘Little Red Corvette’) during the height of their popularity.

This month DJ’s Michael Pope & Ruairi Lynch will select tracks from the artists stellar back catalogs on Friday, January 23rd at Michael Jackson VS Prince: There Can Only Be One to decide whose music will win out on the night.

Tickets to Michael Jackson VS Prince: There Can Only Be One at the Odessa Club on Friday, January 23rd are priced at €8 and are on sale now via entertainment.ie. Doors are at 8pm.