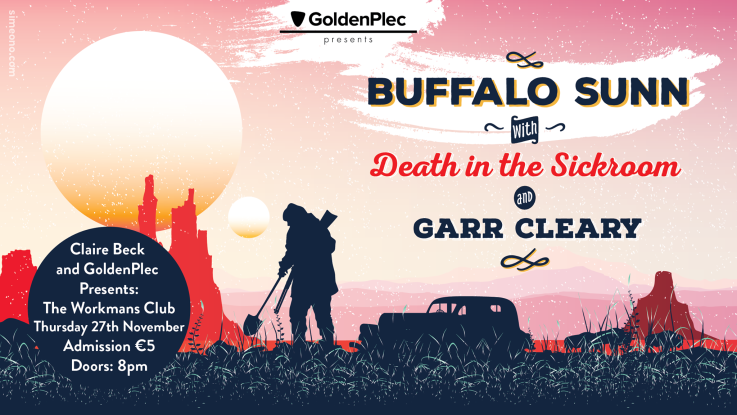 The line-up for this month’s Goldenplec & Claire Beck presents live music showcase at the Workman’s club on Thursday, November 27th has been announced.

Now in its ninth edition the three acts confirmed to play November’s Goldenbeck show are: indie-rock act Buffalo Sunn (read T.L.M.T’s review of their debut album here), indie-pop band Death In The Sickroom (read our review of their latest E.P. Brick to the Face here) and singer-songwriter Garr Cleary.

Previous artists to have performed as part of the Goldenbeck series include: Gavin Glass, Wyvern Lingo, Other Creatures, I Have A Tribe, the Eskies, Zaska, Nova Collective, Twin Headed Wolf and Paddy Hanna.

Tickets to see Buffalo Sunn, Death In The Sickroom & Garr Cleary play this month’s Goldenbeck at the Workman’s Club on Thursday, November 27th are priced at €5 on the night.

Click below to check out music from all three of the acts playing November’s Goldenbeck.