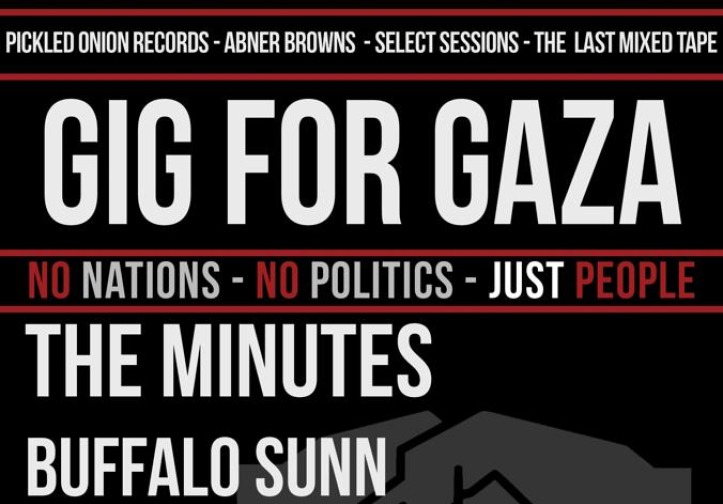 With now just under a week away from Gig For Gaza in aid of the Irish Red Cross: Gaza Crisis Appeal at the Sugar Club (September 17th) we take a look at the acts performing on the night.

The event itself will be hosted by Today FM DJ and Undertones vocalist Paul McLoone and will close with a DJ set from TXFM’s Claire Beck.

Tickets are on sale now via sugarclub.com with all proceeds going toward the Irish Red Cross: Gaza Crisis Appeal (click here for more information).

The Minutes
Headliners of Gig For Gaza the Dublin trio made an impactful return with their sophomore album Live Well, Change Often. Brimming with the bands’ rock ‘n’ roll influences, melded with their own dynamic sound, the record features several stand-out moments including the immense ‘Supernatural’ and infectious ‘Cherry Bomb’. The next single to be taken from the L.P. while be the energetic ‘Hold Your Hand’.

Gangs
The newest addition to the Gig For Gaza line-up. The indie-rock four-piece have been gathering an irrepressible momentum in the build-up to their début E.P. Back to School which delivers on all of Gangs promise and potential.

The Eskies
Alternative-folk outfit the Eskies are one of the country’s most all-consuming live acts. Bustling and bounding on stage with irrepressible energy the group’s set at Gig For Gaza will be an essential experience.

Mongoose
Jazz-folk four-piece Mongoose will also take to the stage at the Sugar Club. The group have had a busy summer 2014 with several festival appearances including Knockanstockan and this year’s Electric Picnic.

Buffalo Sunn
Dublin indie-rock act Buffalo Sunn are a group gathering considerable momentum. The group’s most recent single ‘By Your Side’ was a deeply melodic and harmonic glimpse into the band’s powerful sound, none of which loses it’s potency in Buffalo Sunn’s equally powerful live shows.

Youth Mass
The Meath-based group’s début album Morning Sun | Evening Run was an impressive introduction into their unique blend of alternative-rock and indie leanings. Featuring the tracks ‘Dream’ and ‘Old Enough to Know Better’ the record bustles with creativity.

Tickets to Gig For Gaza with The Minutes, Buffalo Sunn, Mongoose, the Eskies and Youth Mass in the Sugar Club on September 17th are priced at €15  on the night or via thesugarclub.com.